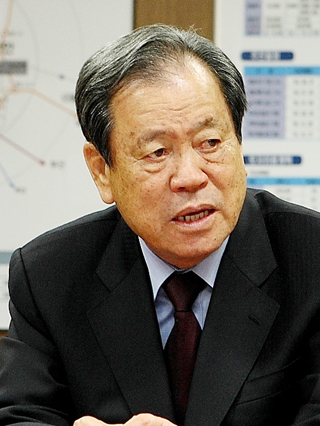 After Lee Ji-song, head of the Korea Land and Housing Corporation (LH Corporation), officially stepped down from his post yesterday, other chief executives at public companies appointed by the former Lee Myung-bak administration are expected to follow suit.

Sitting heads of public corporations have felt growing pressure for them to resign so the new Park Geun-hye administration can fill their positions with executives that share Park values and philosophy.

“I hope that LH Corporation successfully completes a management normalization based on past performance and that it leaps into the future,” Lee said yesterday.

Lee was appointed to head the LH Corporation in October 2009 when the Korea Land Corporation and the Korea National Housing Corporation merged. Lee’s official term was to end in September.

Lee, who is considered a so-called “MB man” - or Lee Myung-bak loyalist - tendered his resignation in late March and the Blue House yesterday notified Lee that his resignation has been formally accepted.

Lee was former head of Hyundai Engineering and Construction, where President Lee was CEO.

Of the public corporations under the Ministry of Land, Infrastructure and Transport, the chief position of the Incheon Port Authority and the Korea Research Institute for Human Settlements are vacant.

The resignations came after Kim Jae-hong, first vice industry minister, made remarks pressuring heads to give up their positions.

He said, “If the persons directly involved are not aware that they should be stepping down then we should let them know.”

The pressure has also been felt by heads of financial institutions.

Lee Pal-seung, chairman of Woori Financial Group, plans to end his term prematurely and is searching for his successor.

Hong Ky-tack, economy professor at Chung-Ang University and one of the members of Park’s transition team’s economic subcommittee, was appointed to head KDB Financial Group.