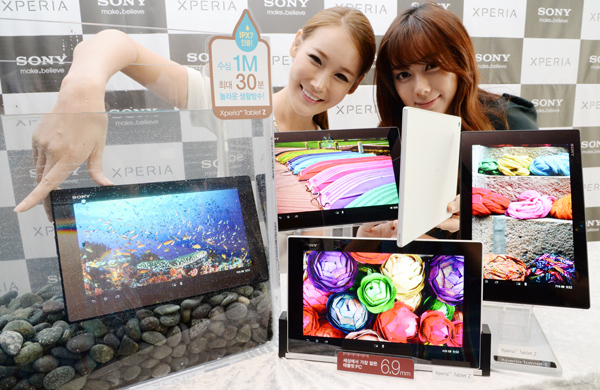 Sony launches its Xperia Tablet Z yesterday at Lotte Hotel in central Seoul. The 6.9-millimeter thick 10.1-inch tablet PC with a full-HD display can operate in meter-deep water for 30 minutes. The tablet PC also has four internal surround sound systems and a Clear Phase TM that allows users to adjust the volume of each speaker. Sony says the front camera on the tablet PC has a resolution of 2.2 million pixels, while the camera on the back of the tablet PC has 8.1 million pixels. The table PC will sell at 599,000 won ($541) for the 16 gigabyte model and 699,000 won for the 32 gigabyte model. [NEWSIS]