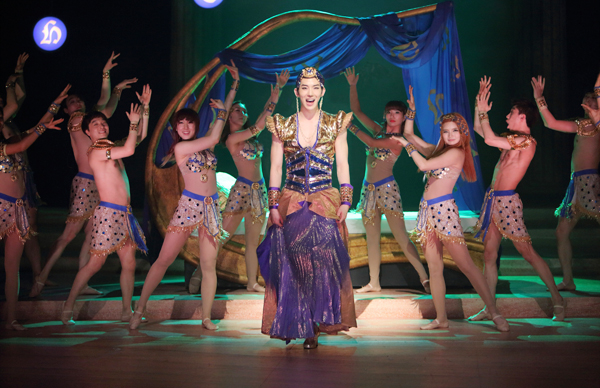 Jo Kwon of 2PM makes his musical debut as Herod in “Jesus Christ Superstar,” which is being staged at the Charlotte Theater in southern Seoul. See THEATER, below. Provided by the organizer

Friday: Grammy Award-winning singer-songwriter Jason Mraz is holding a concert in Seoul. His special guests will perform for the first 100 minutes. The other musicians, invited by Mraz himself, will be guitarist Jung Sung-ha, local electronic band Idiotape, singer Roy Kim and British pop star Joe Brooks.

Sunday: The Keith Jarrett Trio is holding its second jazz concert in Seoul to celebrate its 30th anniversary. The group been highly acclaimed for its unique approach to jazz as well as its improv. The trio consists of pianist Keith Jarrett, bassist Gary Peacock and drummer Jack Dejohnette.

May 21: Italian jazz pianist Stefano Bollani is holding his first solo concert in Korea. The leading figure in the contemporary jazz scene will show his versatility from jazz and classical music to stylish improvisation.

June 1: Top-notch Korean singer Lee Moon-sae is holding a concert to celebrate the 30th anniversary of his debut. At the large venue, the so-called “Stage of Dreams,” he will perform an array of hit songs like “Old Love,” “Gwanghwamun Sonata” and “Sunset Glow.”

June 1 and 2: Belgian conductor Philippe Herreweghe is retuning to Seoul for the second time for Mozart’s Requiem and Symphony No. 41. The master will lead his Orchestre des Champs-Elysees and choir Collegium Vocale Gent as well as Korean soprano Im Sun-hae as a special guest.

June 9: The Dutch symphony orchestra Rotterdam Philharmonic is holding a concert in Korea under director Yannick Nezet-Seguin. The program will include Wagenaar’s Overture Cyrano de Bergerac; Shostakovich‘s Cello Concerto No.1 in E flat Major, Op.107; and Tchaikovsky’s Symphony No. 6 in B minor, Op.74 “Pathetique.” A collaboration with French cellist Jean-Guihen Queyras will add dynamism.

Saturday to June 30: The hit musical “42nd Street” will be revived in Korea for the first time in three years on a dazzling set.

To May 26: “Mama, Don’t Cry” is a musical about a physicist who is a genius except when it comes to love.

To May 26: This musical will take kids on an exciting journey to the town of Bremen with four adorable animal musicians in a tale based on the fairy tale “Town Musicians of Bremen.”

To June 9: This Broadway favorite depicts the last seven days of Jesus’ life. The rock opera musical was created by Andrew Lloyd Webber, who also composed smash hits like “Cats.” The cast includes rock star Yoon Do-hyun and Jo Kwon of 2PM as well as Michael Lee, who has performed the musical on Broadway.

June 15 and 16: New Seoul Opera Company will stage the “Marriage of Figaro,” one of Mozart’s most recognizable works. The opera tells the love story of a young couple, Figaro and Susanna, trying to have a successful wedding day despite infidelity.

May 22 to 26: The National Changgeuk Company, a traditional Korean opera troupe, will blend traditional music and the Western classic play “Medea.”

May 24 and 25: Gayageum musician Ji Soon-ja will perform works by Ahn Gi-ok, master of the traditional zither-like string instrument.

Event information is culled from the Korea

Tourism Organization and other online sources.