Moon Young-hee displays her oeuvre at the residence of the French ambassador in Seoul. By Park Sang-moon

A Korean in Paris is one of the many descriptors used to place Moon young-hee on the European fashion map. And the designer who has showcased her designs year after year since moving to Paris in the late 1990s has again been recognized for her efforts in bridging the gap between Korea and France.

Moon received the Chevalier de l’Ordre National du Merite from French Ambassador Jerome Pasquier on May 7 - the achievement being the crowning success of 20 or so years in the cutthroat fashion world.

Although recognizing Moon’s importance to both France and Korea, the ambassador said that Moon was now no longer limited to those two nations.

The French government thought the woman who “exemplifies the entrepreneurial spirit” revered in France should be treated to a medal, he added.

After the award ceremony and lavish reception at the embassy, Moon reflected on her successes and trials over the years.
Q. What was it like first settling in Paris?

Moon approaches fashion design from a structural perspective, as seen in the layering of this bold outfit. Provided by APR Agency

A.Wow. Paris is the fashion capital, and so I was determined to make a name for myself there. It was fun. I was confident, and I felt it was the best environment to let my creativity flow.

Most importantly, the fact that there were so many experts made it exciting. I knew I wasn’t going to waste time receiving unworthy feedback. I felt like I’d receive constructive criticism so knew I was in a good spot. I knew I’d be able to grow as an individual and improve with the experts’ evaluations of my work.

My life is all about creating, and I’m not good at and don’t have time to meet people and be sociable. At that time, I felt like I could focus all my energy on just creating by tapping into my philosophy and history.

What exactly is your philosophy?

My philosophy has always been about pursuing what I want, things I find pure, bold, fresh and poetic. That has always been the background of my work. It’s hard to exemplify all these values in art, but I always try to do so.

How does that work exactly?

It’s hard to pinpoint how it works, but for example, I can say this collection will be based on the theme of horseback riding along the moor, and once I pick a theme, I give it my all despite the seasonal constraints.

What was it like being a pioneering Asian designer on the European scene?

Because the scene was crowded with Japanese designers, I was classified as one of them, which was frustrating.

A dress from Moon’s Spring/Summer 2011 collection.

Still, I felt proud to be able to represent Korea in the fashion capital.
How did you overcome that?

I just worked hard on creating something that was unique, only something I could do. I knew it wasn’t going to be a one- or two-time effort, so I kept at it for the past 18 years. I am grateful to France for allowing me to tap into my creativity.

As an artist, what differences are there between Paris and here?

Well France is a lot more liberal; the art scene encompasses a wider range of genres. The Korean art world is a bit smaller, and I hope it will become more liberal in the future.

You mentioned last year when you got on board a collaborative project with the National Museum of Contemporary Art that it was exciting to see fashion regarded as art.

Yes, it was unheard of to describe fashion as art back when I was starting out in Korea. In 1987 I think it was, the National Museum of Contemporary Art did showcase fashion as artwork for the first time. I was one of many artists to take part and was quite excited. Of course, last year it was just my collection. It combined a show and a gallery, and it was great.

Whether it be fine art or fashion, it’s all art. The only difference is the way that it is presented. But in Korea, there is this notion that fashion isn’t art. They tend to think of it as just clothing. That notion is changing, and that’s a movement that I’m devoted to.

Would you consider other collaborations with art galleries?
Sure, if the timing is right. I’d like to put more time into it, though, and make it grander. 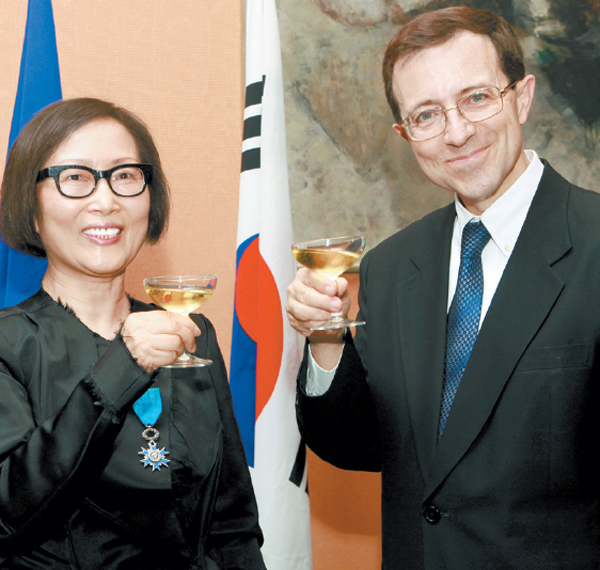 You took part in Seoul Fashion Week this year. What did you think of it?

I wish there were more experts at the show. The Seoul collection had more everyday people than reporters and buyers, which was a bit disappointing. Abroad, there are more press and buyers attending such shows.

From about four or five years ago with the opening of your atelier in Korea, you made a conscious decision to take part in more shows and projects in Korea. Why?

After working for years in Paris, I didn’t have much opportunity to dress Korean women. Before my departure from here, a lot of women loved my designs, but because I was away for so long, I felt like my work was being forgotten. And because I’m recognized globally now, I thought it’d be great to return to my motherland to offer my collection to Korean women.

When women wear my clothes, I want them to feel as if their beauty is enhanced, to feel happy and as if they’re wearing a piece of art. My clothes can easily last 20 years or more; they’re not fad items. I wanted to offer that to Korean women.

So will your Korean collections be different from the French collections?

I don’t think there is any need to provide different clothes for the two markets. Korean women have bodies to rival those of Western women, and they do have a sense for style.

Sure, there are little differences. If, let’s say, Europeans like “A,” Koreans might like “C.” So it’s a matter of choosing what each market would like. For Korea, I’ll have to select pieces that I think will do well here.

What do you think of up-and-coming Korean designers?

I can’t name one person that I like specifically, but overall, young designers seem to be doing a good job.

What about street fashion? What do you think of the average Korean woman’s attire?

They’ve come a long way. But even now, you don’t see people with their own unique sense of style. I wish they’d try to be a little more daring. It looks like they wear the same thing again and again. I think if you’re going to put that much time and money into dressing well, you should try to mix it up. This in turn helps cultivate style.

Then what fashion tips can you give to Korean women?

Koreans like to dress simple, and that’s fine, but it’s nice to add your own touch. For example I’m wearing chiffon pants under my dress and made it my own look. I try to dress creatively. Instead of wearing the blouse and jacket combo, one could do without the blouse and wear a jacket that doubles as both.

You should also work with your shape and dress the way you like.

As a high-end label designer, what are your thoughts on working with lower-end fashion retailers?

I think it’d be a lot of fun, and I would love to try it. If I were to offer something for a chain store, my main collection would be the motto, and I’d produce simpler pieces with lower prices.

* Entered the Paris fashion scene in 1994

* Has shown 35 collections to date

* Based in Paris, but takes part in Seoul events such as Seoul Fashion week and a collaboration with the National Museum of Contemporary Art

* Opened an atelier in the French enclave Seorae Village, southern Seoul, in 2008