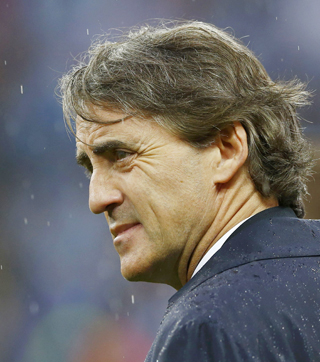 LONDON - A week of worldwide acclaim for Alex Ferguson and his 26 years in charge of Manchester United patently failed to get the message through to Manchester City’s trigger-happy owners that stability is the key to sustained footballing success.

Instead, goaded by their rivals’ city-center parade with the Premier League trophy two days after City were humbled by Wigan Athletic in a massive FA Cup final shock, they sacked manager Roberto Mancini, the man who a year ago to the day was being worshipped as the ‘City Messiah.’

In the modern world of soccer short-termism, no manager sacking is ever truly a surprise and Mancini’s exit looked a certainty once he spoke out against the club’s Abu Dhabi owners after Saturday’s Wembley defeat.

Few, however, could have been shown the door with such a ringing endorsement.

“Roberto’s record speaks for itself and he has the respect and gratitude of Sheikh Mansour, myself and the Board for all of his hard work and commitment over the last three and a half years,” said chairman Khaldoon Al Mubara.

“He has clearly also secured the love and respect of our fans. He has done as he promised and delivered silverware and success, breaking the club’s 35-year trophy drought and securing the title in 2012.”

That title, City’s first in 44 years, was secured in the most dramatic fashion in the final seconds of the final match of the season by Sergio Aguero’s goal, and, with a stunning 6-1 victory at Old Trafford en route, would, in any normal world, have been enough to establish Mancini for the long run.

The multimillionaire owners showed, however, that they wanted more, more, more, and quickly. City’s failure to get past the group stage of the Champions League for the second successive season left them feeling short-changed and when their defense of the Premier League title fell away, Mancini’s last remaining hope was the FA Cup.

A limp display at Wembley, however, when they were deservedly beaten by a Wigan side looking destined for relegation, left City without any silverware and only the consolation of another crack at the Champions League next season.

Arsenal’s Arsene Wenger is left as the clear ‘Grandfather’ of the Premier League with almost 17 years’ service. Tony Pulis is next in line after six years at Stoke City.

“Because of the money thrown at the club [City], the impatience is there, and the demand for success is much higher,” Wenger said a few hours before the Mancini announcement.