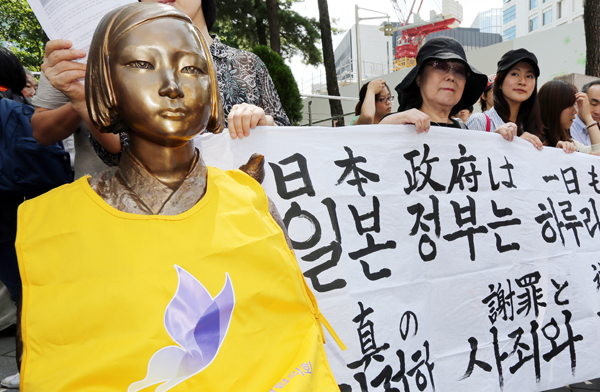 “The government of Japan has already expressed its feelings of deep remorse and heartfelt apology, and it has expressed feelings of sincere mourning for all World War II victims, at home and abroad,” wrote Japanese Ambassador to the United States Kenichiro Sasae in a Letter to the Editor for the Washington Post. It was a response to the April 27 editorial, “Shinzo Abe’s Inability to Face History,” which solemnly criticized the Japanese government’s historical perspective.

Sasae’s claim is partly right and partly wrong. The Japanese government has been making apologies whenever opportunities arose or, more precisely, whenever necessary. If I am not mistaken, the eight prime ministers in the last 10 years have all expressed regrets on various occasions. The Japanese emperor, symbol of the nation, expressed his “thoughts of painful regrets.” Japan has made apologies, indeed. So, some Japanese reporters with whom I am close would ask me over drinks, “Do we really need to apologize more?” Then, I always say half-jokingly yet very seriously, “Yes, until you mean it.”

The most critically wrong remarks in Sasae’s writing are the modifiers “heartfelt” and “sincere.” He would remember March 2007, when he was the Foreign Ministry’s Asia-Pacific section chief. Abe, prime minister at the time, made an absurd argument to the Diet: “The material discovered by the government contained no documentation that directly indicated the so-called coercive recruitment by the military or the authorities.” While he did not budge on Korea’s protest, pressure from the United States made him change that stance 21 days later. He said he would abide by the Kono statement and apologized. Last week’s controversy over his remark denying aggression unfolded similarly to the incident six years ago. He ignored Seoul’s protest, then backed down when America got involved. Such an attitude can hardly be described as “heartfelt” or “sincere.”

Personally, I was more interested in the letter from another reader, published next to Sasae’s view. Japanese-American reader Yuki Henninger wrote, “As a Japanese native in her late 60s who was schooled in Japan, I was reminded that we were taught that our country was a victim of atomic bombs but not that it also was a major perpetrator of the war that led to them. .?.?. Unfortunately, my contemporaries in Japan, as well as the Japanese media, seem reluctant to reflect on this issue.”

I don’t mean to put blame on fellow journalists, but I agree with Yuki. Japanese media no longer has a check and criticism function.

While Japan Conference, a right-wing group coordinating and controlling the militaristic line, is thriving, I have seen no in-depth report about it. Columbia University professor and prestigious Japan expert Gerald Curtis condemned Abe’s historical perspective in the name of the international community. But I haven’t seen any reports seriously investigating the historical circumstances and consequences of Japan’s aggression and what the international community is addressing. The Japanese press is not willing to face the issue, and they are mistaken if they think feigning ignorance is for the good of Japan.

The eight million right-wing members of the conference do not represent all of Japan. I believe the majority have a conscience like Yuki. Korea and Japan need to make efforts to let people learn of the truth and make their own judgments until both countries can approve modifiers like “heartfelt” and “sincere.”

*The author is the chief of the Tokyo bureau of the JoongAng Ilbo.