Undaunted by recall, Hyundai looks ahead

Undaunted by recall, Hyundai looks ahead 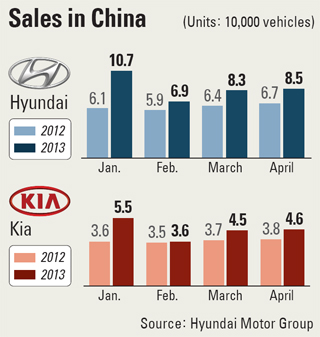 Hyundai Motor Group, which was hit Monday with a huge recall in China, is considering building an assembly plant in western China to meet an anticipated supply shortage beyond 2015 in the world’s largest auto market.

Hyundai and Kia were ordered by the China’s General Administration of Quality Supervision, Inspection and Quarantine to recall more than 175,000 vehicles because of faulty brake light switches, the same problem that prompted a massive recall in the United States.

Hyundai Motor Vice Chairman Hsueh Yung-hsing last week said the automaker is considering building a fourth plant with an annual capacity of 300,000 vehicles to supplement the three assembly plants it operates in Beijing as Beijing Hyundai Motor in a joint-venture with Beijing Automotive Group.

Its third plant is currently working to expand annual capacity from 300,000 to 450,000 units by the end of this year.

Dongfeng Yueda Kia Motor, a joint venture of Kia, Dongfeng Motor and Jiangsu Yueda Group, has two plants in China, with an annual production capacity of 440,000 vehicles. The automaker is scheduled to open a third 300,000-vehicle plant in China next year.

With a possible fourth Hyundai plant and expansion of the third Kia Plant, the auto group’s annual production volume would surpass 2 million.

Combined Hyundai and Kia sales have grown 10 percent in each of the past two years and the group is aiming for 1.47 million in sales this year, an 11 percent increase from last year’s 1.33 million.

However, despite these promising figures, Hyundai officials said there have been challenges as well. The Chinese consumer quality watchdog said Hyundai needs to recall 121,835 ix35 models produced from April 2010 to October 2011; Kia must recall 53,897 Sportages made from July 2010 to October 2011.

Hyundai worries the recalls may affect brand value in China, where the automaker has had success with Chinese-only models like Yuedong.

With a weakening yen, there also is concern that Japanese automakers could rebound despite the ongoing dispute over the uninhabited islands called Diaoyu in China and Senkaku in Japan.

Toyota said its China sales in April declined 6.5 percent from April 2012, but it was an improvement from the 11.7 percent year-on-year drop in March. Nissan year-on-year sales last month rose 2.7 percent after plummeting 17 percent in March.

According to media reports, Japanese automakers have been introducing new models along with improved warranties and promotions.

Hyundai says the company is focusing on its own goals rather than worrying about other automakers. The Korean automaker is expanding its network of dealerships from 802 to 860, while Kia also plans to increase its dealerships to 670 from 564 by the end of this year.

“The Chinese market is very important for us,” said a Hyundai Motor official. “We will focus on quality first and expand our volume based on that.”