Progressive Justice Party chair says the future will be tough

Progressive Justice Party chair says the future will be tough 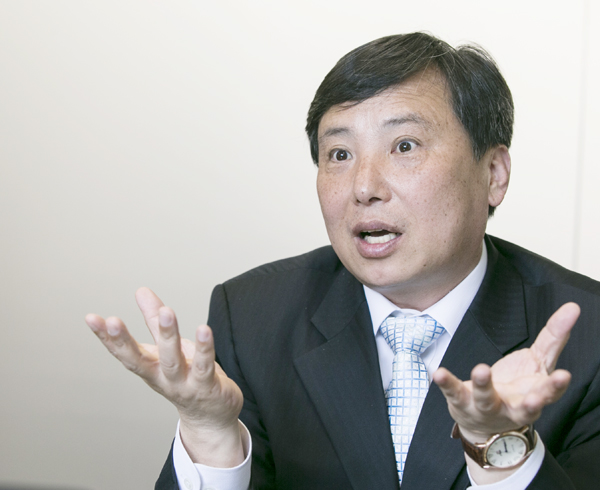 For Cho Joon-ho, current co-chair of the Progressive Justice Party and former co-chair of the Unified Progressive Party, the date May 12, 2012 is unforgettable. It was the day he sustained a serious neck injury which required surgery after some UPP members grabbed his hair and blocked his way in protest of his claim that the party’s primary for proportional representatives was rigged. Cho’s injury made headlines and revealed a shameful side of the progressive political party.

After the incident, Cho, Sim Sang-jeong and Roh Hoe-chan left to form the Progressive Justice Party, and the split lasted through the Dec. 19 presidential election in which the two progressive parties fielded separate candidates.

The JoongAng Sunday met with Cho on May 2 for an interview to discuss a variety of issues.

Q. It has been a year since your injury.

A. Let’s just call it a “supreme committee incident.” The incident has disappointed the people and dissolved progressive circles. It’s very regrettable.

But we cannot just stay at that point. When I bump into Unified Progressive Party members, I say hello calmly. Each side pulled itself together. Each is seeking reforms to get the people’s input [in terms of restoring trust in progressive politics].

Park, the woman who grabbed my hair, was released from prison after receiving a suspended sentence in the appeals court. Previously, a lower court handed her a 10-month prison term. I said in the trial that it’s not appropriate to arrest [Park]. The involvement of the police and prosecutors discouraged political progress in progressive circles. Several people grabbed my hair. As the co-chair of the party, it was heartbreaking to see party members attacking each other. It’s not right to bring up the story so frequently.

The scandal split the Unified Progressive Party in the run-up to the December presidential election. Lee Jung-hee, who was a presidential candidate, was criticized for helping her rival Park Geun-hye win the election.

The idea that Lee Jung-hee was the biggest contributor toward Park’s victory is exaggerated.

But the result could have been different and opposition parties could have won if progressive circles formed a new coalition and took a low-key approach when the Unified Progressive Party announced the result of the investigation into vote-rigging a year ago.

It’s painful. I told Kang to brave his troubles and pave a new way. But Kang said it’s difficult to support progressive politics in the Jeolla region.

It sure is difficult. Politicians supporting laborers, farmers and the socially underprivileged are certainly needed, but our base is small [in the region].

Voters there elected Oh Byeong-yoon and Kim Sun-dong, Unified Progressive Party members, as lawmakers representing the region in the April election last year. They seem to be taking a wait-and-see approach after the party’s vote-rigging scandal.

Will Kang participate in the new party that independent lawmaker Ahn Cheol-soo is expected to create?

Kang Dong-won was against forming a coalition with Ahn Cheol-soo. He said it’s difficult for a different political circle to seek new politics and get settled in the Jeolla region, which is the home turf of the main opposition Democratic Party. He said it will be easier for an independent political figure.

That was another painful incident. Roh Hoe-chan was the first party member who won a seat in a district in Seoul, but his seat was stripped away. I don’t think the people’s support for Roh has completely cooled down.

We just didn’t have enough opportunities to unveil Kim Ji-seon, the labor and woman’s rights activist, to the public. The Nowon C District by-election was portrayed as Saenuri Party versus Ahn.

Ahn’s victory means he has begun to encroach on the progressive political scene.

Ahn has not only reduced the political power of progressive circles, but he has demanded changes to established politics.

Can the Progressive Justice Party form a coalition with Ahn?

Ahn has talked a lot about new politics, but his message is not clear. Still, Ahn has said “new politics is for ordinary people,” and in that sense, his political philosophy is not that different from us. If Ahn proposes good bills and he needs our support, then we can cooperate.

Is forming a coalition with Ahn possible ahead of the October by-election and local elections next year?

It’s too early to bring up that subject. Every possibility is open. We can work together or independently.

Will the progressive circles eventually reunite?

It’s not easy. We can discuss the matter after each side seeks new ideas and the gap is narrowed.

You were a leader of the Kia Motors labor union and the Korean Confederation of Trade Unions. What are your thoughts on the Park Geun-hye administration’s economic democratization policies?

It’s too early to evaluate policies. Some policies are already implemented, but it’s not easy for the people to feel the changes. In some ways, they’re just for show.

If the Park administration gives up its original platitudes and moves toward sincerity in terms of implementing related policies, we will join them. If not, we’ll do the opposite.

The Progressive Justice Party is preparing for a rebirth of sorts.

After the split with the Unified Progressive Party, the Progressive Justice Party was created in haste ahead of the presidential election.

We will announce the rebirth of the party in July to identify who we are. We will expand our presence by creating chapters in cities and provinces. We’re studying the politics of Sweden, Brazil and Germany in preparation.

What’s the future path for progressives?

I have met several senior mentors during the past year, including Paik Nak-chung, a Seoul National University professor; Pastor Kim Sang-keun; Kwon Young-ghil, former Democratic Labor Party chairman; and Dan Byung-ho, leader of the Korean Confederation of Trade Unions. Most of them said not to give up although it’s difficult.