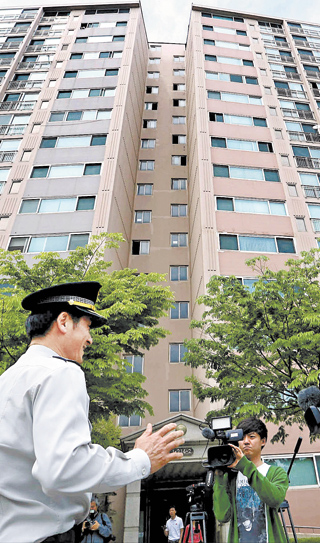 Reporters camp out in an apartment complex in Gimpo, Gyeonggi, where Yoon Chang-jung is believed to have been holed up since Saturday’s press conference. By Park Jong-keun

President Park Geun-hye’s otherwise highly successful premiere trip to the United States has been overshadowed by the unsavory scandal involving her spokesman, but an opposition leader yesterday urged the nation to appreciate her accomplishments separately from the disgraceful incident.

“Despite the alleged sexual abuse by [Park’s former spokesman], I believe the achievements from her U.S. trip should be respected,” said Representative Park Ki-choon, outgoing floor leader of the largest opposition Democratic Party. “It is undeniable that she succeeded in various areas such as reinforcing the Korea-U.S. alliance, coordinating North Korea policy with Washington and improving economic and cultural cooperation.”

He also noted that it was a great success for Park to obtain the U.S. support for her “Korea Peninsula trust-building process” and to see the U.S. Senate adopt the resolution marking the 60th anniversary of the U.S.-South Korea alliance.

“It was also a great achievement for her to ease the North Korea risk,” he added.

The opposition leader also gave a rare endorsement to Park’s arduous efforts to manage a tight schedule throughout her trip, adding “it is regretful to see her incompetent aides ruin an otherwise successful trip.”

He still advised Park to reflect on her leadership and learn from the incident because it revealed the limits and evils of her obstinacy in making appointments since she has more than four years and eight months left in her term.

Park fired her spokesman, Yoon Chang-jung, in the middle of her trip last week after he was accused of sexually assaulting an intern from the Korean Cultural Center in Washington.

The scandal tarnished her maiden trip abroad and reignited criticism about her secret, headstrong way of recruiting aides.

During her six days in the United States last week, Park visited New York, Washington and Los Angeles and met with the Korean communities in the major American cities to appreciate their support for the homeland.

She also held her first summit with U.S. President Barack Obama and gave a highly praised speech before a joint session of the U.S. Congress.

As the Yoon scandal continued to dominate headlines for days, presidential aides have expressed their frustration. During her meetings with the senior secretaries and cabinet on Monday and yesterday, Park promoted the importance of the trip and asked her aides to thoroughly follow up with the outcomes for further progress.

“I went to the United States with a heavy responsibility,” Park said Monday. “It took place at a very important time because the two new administrations were to create the foundation and framework of their cooperation for the next few years amidst serious public concerns on the nation’s security and economy. Fortunately, I have seen great outcomes.”

In addition to her successful coordination of North Korea policy with Obama and winning his support for her vision for the Korean Peninsula and Northeast Asia, Park also said she was able to ease North Korea risk in the South Korean economy and attract $380 million in investment in cooperation with the Korean businessmen.

While the president also reiterated the successful outcome of the trip to her cabinet yesterday, Foreign Minister Yun Byung-se suddenly canceled his briefing for the local and foreign press yesterday. The ministry said it was delayed to May 27.

“Not only the Korean government but also U.S. officials were all satisfied with this successful trip,” Minister Yun said in an interview with KBS TV on Sunday.

“And we are very sad to see the incident in this situation.”