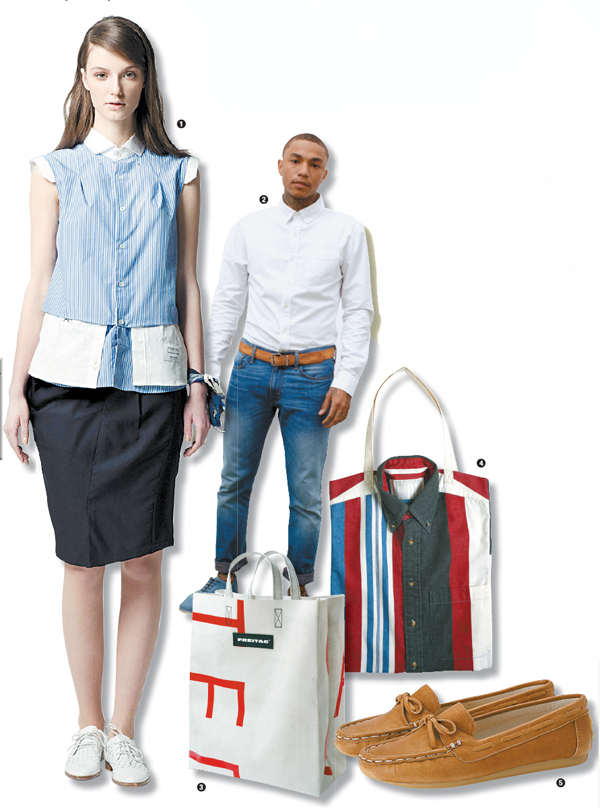 1. Re;code clothes made from unsold clothes that would have been thrown away. Provided by Re;code. 2. Jeans from Levi’s Strauss’ Waste

Fast fashion brands push customers to buy one T-shirt after another as they provide the latest styles with continuous discounts. But such brands make some people, whether they are in the fashion industry or just fashion-forward customers, rethink their definition of ethical consumption.

In April, a pair of eco-friendly jeans was unveiled at Lotte Department Store, Sogong-dong, central Seoul. The jeans were ordinary denim, except the clothing was made partly from recycled materials. Eight plastic bottles were used to spin threads for the jeans and the threads make up 20 percent of the denim.

The jeans were jointly produced by Levi Strauss, the Coca-Cola Company and New York-based upcycling venture Ekocycle, which converts waste materials or useless products into new materials or products. As a limited edition, the green jeans are available at nationwide Levi’s stores for a limited time.

Last month, will.i.am, a member of the Black Eyed Peas, showed up wearing recycled hats and jeans from Ekocycle at Staples Center, during NBA Green Week.

Such a trend is not new, though. A growing number of companies have been trying to provide alternatives for customers who are doubtful about paying 10,000 won ($8.97) for one T-shirt after another.

“I didn’t realize it takes a huge amount of water and chemicals to produce a single T-shirt until recently,” said Lee Eun-jeong, 33, who frequents fast fashion brands like Uniqlo, H&M and Zara. “After I realized it, I try to buy less or some other products that have less impact on the Earth.”

If you are one of the fashion-savvy who feel guilty about consuming too much, you may consider buying recycled products.

For example, the Swiss brand Freitag, a leader of upcycling, gives new life to used truck tarps by turning them into durable, waterproof bags. The bags are made of printed truck tarps, seatbelts and bicycle inner tubes which spent their first life on the road.

The Freitag brothers who founded the company loved riding bicycles and they started making messenger bags out of disposed tarps so they could carry them on their bikes in the rain in 1993. Now, the commercially-made bags are one of the most loved bags in the world, not just because they’re eco-friendly, but more for their stylish and unique design.

Indeed, Freitag’s Korean representative, Ji Won-duk, said, “At first, when we launched the store in Itaewon in 2011, most of our customers were people who were conscious about the Earth, who have a good grasp of the products since before the opening. But recently, I see ordinary people coming to the store who adore this brand for its unique style.”

They are quite costly because they are handcrafted in Switzerland, but their longevity and uniqueness justifies the price. For more information, visit www.freitag.ch.

Some Korean companies are also jumping on the green bandwagon. Korean apparel giant Kolon FnC launched a new line of its brand, Re;code, which uses industrial materials like automobile airbags.

Re;code was launched in March 2012 by transforming stocked clothes that would otherwise be incinerated into new clothes by Korean designers like Park Sun-joo and Kang Sung-do, who design each piece of clothing individually.

In the apparel industry, new clothes are sold at department stores or retail stores each season, then unsold clothes are moved to outlet stores the following year, and the remaining clothes end up in landfills.

In order to reduce waste, Re;code recycles the unwanted clothes. Male jackets are transformed into female vests, jumpers into bags and tents into clothes.

Re;code also provides jobs for the physically challenged at Goodwill Store, an organization established by Seoul Metropolitan Government to create jobs for the disabled. The workers remove zippers, sleeves and pockets.

Long before companies like Re;code joined the eco-fashion movement, there were small-sized social ventures committed to preserving the environment.

One of those organizations is Reblank, which was established in 2008 by former members of Beautiful Store, a nationwide chain that sells secondhand clothing and everyday items.

Reblank recycles a variety of waste into consumer products. For example, tarpaulin banners or clothes are converted to waterproof bags and sofa leather is made into wallets.

Regarding the rising awareness over the environment, Reblank’s founder, Chae Soo-kyoung, said, “I think the prospect of the upcycling market is getting inspired as it is drawing more attention, compared to the past.

“But still, I think it will take more time and commitment to be widely established as a culture and lifestyle.”

Most of their items are handmade, so they are more expensive than some products, but still cheaper than other recycled products. Tarpaulin bags cost 24,000 to 37,000 won. Leather wallets cost 67,000 to 73,000 won.

Reblank’s products are available at an offline store, “Around the Corner,” in Sinsa-dong, southern Seoul, and “Object” and “Little Farmers” near Hongik University in western Seoul. For online shopping, visit www.reblank.cafe24.com.

If you are looking for more affordable items, visit Little Farmers near Hongik University, western Seoul. The eco-themed market is full of adorable items, from recycled notes to plates made by melting glass bottles and accessories to bags. Its main items are leather products, though.

The most favored products are vegetable leather shoes. While the leather-making process generates chemicals and air pollution, vegetable leather is tanned using natural ingredients found in vegetable matter, minimizing chemicals’ effect on the environment. It is also good for skin as it contains no heavy metals, according to Little Farmers.

The natural scratches and subtle variations in tone also highlight their originality and authenticity.

Leather products at Little Farmers are fairly priced, considering their trendy yet classic design and demanding manufacturing process. A pair of mocha shoes made with cow skin costs 149,000 won.

Besides its own products, the store also displays eco-friendly items from other social companies like Orgdot, Earthman, Eco Party Mearry and Reblank. Even if you don’t buy anything, it is a pleasure to look around the shop that is full of odds and ends such as smartphone covers, wallet and passport covers. The largest store is located near Hongik University but there are five more shops across Korea. For more information or online purchase, visit www.littlefarmers.co.kr.