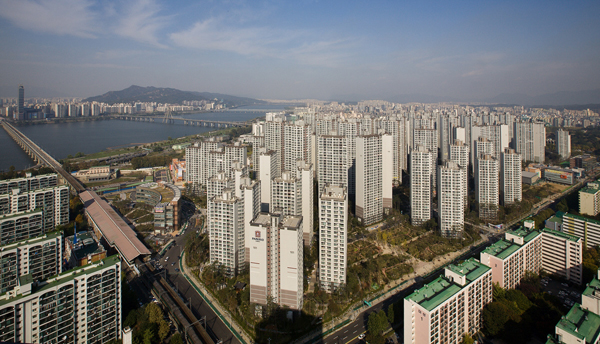 Lee, a 39-year old owner of an apartment in Jamsil, southeastern Seoul, has been getting lots of calls from realtors these days. They want to know if he’s ready to sell his unit.

Lee says he’s gotten calls in the past to ask if he was interested in letting the unit out on a long-term lease. He can’t recall any calls about outright sales.

“I got two calls on Tuesday alone and several text messages saying there are buyers interested in my apartment,” Lee said. “This is the most calls I got in the last two years or so.”

Life is returning to the real estate market after the Park Geun-hye administration announced measures to encourage transactions in April, including the extension of a tax cut that was offered until the end of last year. 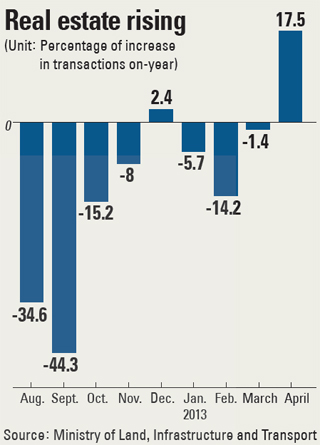 According to the Ministry of Land, Infrastructure and Transport, housing transactions in April grew 17.5 percent compared to the same period last year.

Last month a total of 79,503 apartments changed hands, up from 67,655 a year ago. Housing transaction also increased compared to the previous month at a rate of 19.3 percent.

“In the first two months, housing transactions fell compared to the previous year, but there has been a mild recovery since March,” a ministry official said.

In January, housing transactions were down 5.7 percent and the fall was shaper the following month as they tumbled more than 14 percent. In March, transactions slowly recovered, but they were still 1.4 percent less than a year before.

The sharp drop in housing transaction since the beginning of the year was largely caused by the failure to extend tax benefits offered since last September by the outgoing Lee Myung-bak administration.

The market quickly froze after the tax benefits ended at the end of last year.

On April 1, the Park administration announced stimulation measures including an exemption for five years on capital gains tax for sales of apartments that sell for under 600 million won ($538,200) or that are smaller than 85 square meters (915 square feet).

Transactions in the greater Seoul area improved significantly: 33,283 transactions in April, up 28.6 percent from the previous year. In the city alone, transactions grew 20.3 percent to 10,438. A year earlier, only 8,087 housing units were bought and sold.

This is a strong contrast to the housing transactions in other areas that grew 10 percent on-year to 46,222.

Gangnam, Seocho and Songpa were notorious in the mid-2000s for driving up real estates prices.

Deputy Prime Minister and Finance Minister Hyun Oh-seok said he expects the real estate market to improve even more in May.

“Housing transactions have gone up and the housing prices in the greater Seoul area have stabilized,” Hyun said during an economic minister-level meeting held in Seoul yesterday. “The market recovery will likely expand after this month once the tax support [from the April measure] and supplementary budget starts taking effect.”