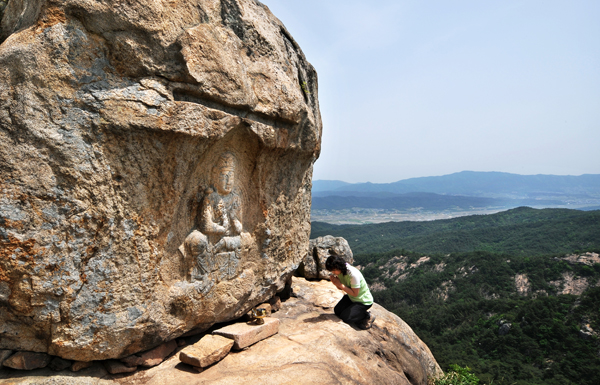 The seated bodhisattva looks as if he is sitting on a cloud.

Mount Namsan in Gyeongju, North Gyeongsang, is rich with important Buddhist treasures of the Silla Kingdom (57 BC-AD 935). The mountain was named Namsan (which means “southern mountain” in Korean) because it was located to the south of the royal palace. It is also a place that bore witness to the rise and fall of the Silla Dynasty.

Named a Unesco World Cultural Heritage site in 2000, Mount Namsan is pretty much a museum in itself. Up to now, 672 cultural properties have been discovered on the mountain. They include 147 temples, 130 stone Buddhist statues, 100 stone pagodas, 22 stone lanterns, 13 royal tombs, four fortresses and 22 lotus-shaped pedestals.

The mountain has two main peaks: Geumobong (468 meters) and Gouibong (494 meters). It is not a grand mountain in terms of height, but it stretches four kilometers from east to west and eight kilometers from south to north with more than 40 valley trails.

One of the most significant sculptures, Josanggun Buddha Statue, is located near Tapgol Valley on the southeast end. The huge natural rock (10 meters in height and 30 meters in circumference) reflects the fascinating world of Buddhism with as many as 34 carved figures, including saints, bodhisattvas and guardian gods of temple gates. In Samneung Valley, another carved image depicts both present life and life after death. 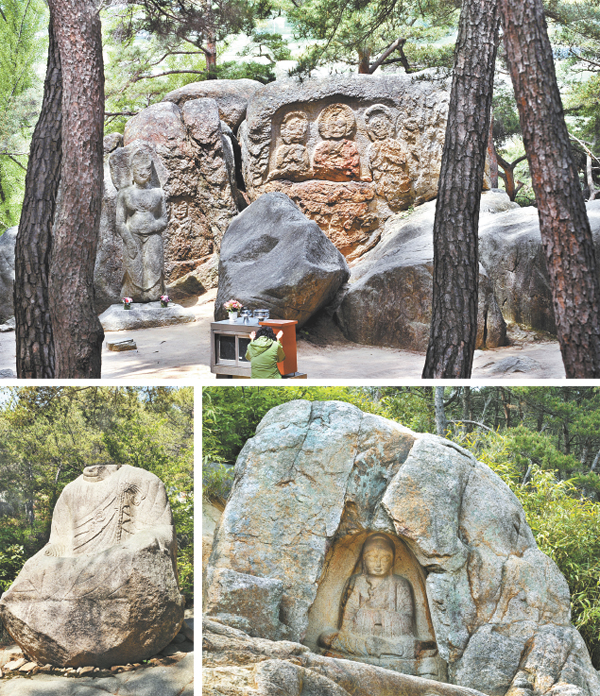 Clockwise from top: Different images on the Josanggun Buddha Statue are visible from all angles; the Seated Bodhisattva in a cave looks as if a friendly female saint is resting inside; the Seated Buddha Stone in Samneung Valley, found without a head, is known for its detailed and delicate features.

The people of ancient Silla long worshiped Mount Namsan as they believed god lived within its rocks. And with the further spread of Buddhism during the dynasty, Mount Namsan became a truly sacred place where Buddha stayed and looked after the people. Buddha stone pagodas and statues further flourished after Silla unified the three kingdoms, including Goguryeo and Baekje, in 668.

In harmony with the beautiful scenery, Mt. Namsan is most certainly a treasure trove filled with an abundance of historical relics. The mountain is sure to allow travelers a unique journey that captures Silla history over a millennium along with the picturesque landscape.

Buddhism in Korea was in its heyday during the Silla and Goryeo eras. In those days, Buddhism was legally declared as the state religion, temples were wealthy and monks had great power. And naturally, Buddhist art also flourished.

That is why Gyeongju, which used to be the capital of the Silla Dynasty, is home to many important Buddhist relics of Korea. Although the number of Buddhist believers has been on the decline, there’s no doubting the religion’s great impact on Korea.