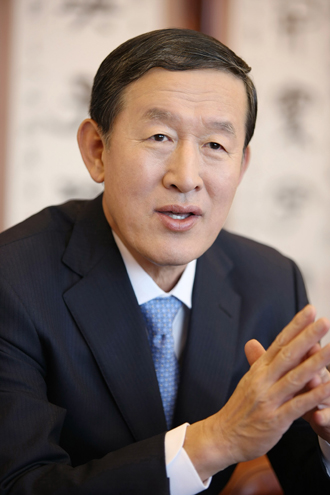 GS Group Chairman Huh Chang-soo is a supporter of President Park Geun-hye’s “creative economy” campaign and has urged his own company, the nation’s 10th-largest conglomerate, to be a model of the economic vision.

“For Korea to grow and for GS to become a top company, we need a new strategy beyond imitation to come up with innovation ahead of others,” Huh said at a Value Creation Forum held by the company in Seoul yesterday. “That’s the creative economy.”

Although there is still debate about what the notion of a creative economy for Korea really means, Huh described his vision of the term.

The 64-year-old Chairman also talked about the issue last month during a meeting of company executives. Huh also leads the Federation of Korean Industries, a lobbying group for the nation’s top companies.

In order to encourage a creative economy within the company, Huh emphasized the importance of on-site activities and the flow of creative ideas between groups.

“We need to remove barriers between organizations and offer opportunity to creative talents by recruiting people based on their talents, not their specs,” Huh said. “The power of our group’s competitiveness comes from our managers and employees on-site.”

Huh has recently been checking the company’s research center and plants.

On Sunday, as FKI Chairman, Huh visited a traditional market and listened to merchants’ ideas to improve their businesses.

Huh’s GS has been looking for new businesses such as renewable energy.

On Monday, its affiliate GS EPS said it will build Asia’s biggest biomass generation plant in Dangjin, South Chungcheon after investing 300 billion won ($269 million). The construction is expected to be complete in August 2015.

Biomass facilities use plants or plant-derived material to generate power.

The 100-megawatt plant will have the capacity to supply power for 110,000 people.

“As the business environment gets uncertain and faces difficulties, we need to have a wide point of view that can prepare for the future and sort out needed investments,” Huh said Monday. “GS will further boost its environmental-friendly business.”

GS has been holding Value Creation Forums for four straight years, sharing creative ideas and successful examples of innovative business with its affiliates.

“This forum is a very meaningful event in which employees and leaders of GS encourage each other and plan for a better future,” he said. “It should serve as an opportunity for us to learn and move forward.”