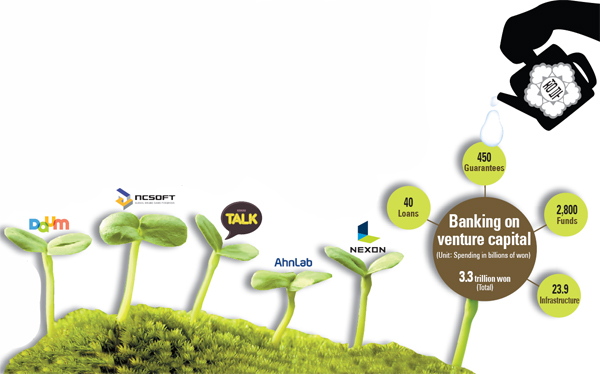 The Park Geun-hye government wants to start a second venture capital boom by pouring more than 3 trillion won ($2.7 billion) in the industry.

The move comes when the Korean economy is in need of new innovative business opportunities to keep ahead of China industrially and even Japan, which is having a resurgence in exports due to the weakening yen.

It is also part of the Park administration’s policy of creating a “creative economy.”

“A big difference from past government policies that focused on increasing the number of start-ups is to lay an investment-based foundation that encourages reinvesting in them to support their sustainable growth,” said Hyun Oh-seok, deputy prime minister for economy and finance minister at a joint press conference held in the central government complex in Seoul.

Hyun pointed out there’s a problem for start-ups in the normal cycle of a company growing, making a profit and reinvesting in new products. Since most start-ups begin with loans, they are busy repaying the loans once they make a profit rather than reinvesting money in new businesses.

“The essence of the latest plan is to replace loans with angel investments and encourage M&As of start-ups by providing more tax incentives and financial support,” the deputy prime minister said. “The goal is to create an environment in which young entrepreneurs make a second attempt even if they fail at their first attempt.”

President Park said, “The government will proactively remove barriers that hinder innovation and convergence of technologies and ideas,” at a ceremony to mark the 48th anniversary of Invention Day held in Yeouido, western Seoul.

According to Venturein, an e-notification system for venture capital, there were 29,200 companies started with venture capital in the country as of May. The figure has continued to grow after a setback in 2002 in the wake of the bursting of the tech bubble of the late 1990s.

For the next five years, the government plans to provide 3.3 trillion won to support start-ups. It hopes an additional 1 trillion won will be offered by the private sector. The plan includes postponement of taxation for M&As of start-ups, tax deductions for investors in them and creation of a third stock exchange, the Konex, for start-ups. 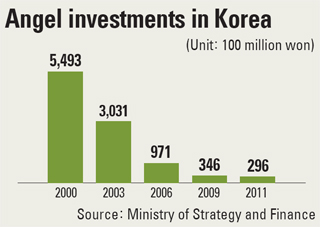 The government wants to encourage the first generation of successful entrepreneurs to make investments in other start-ups and set guidelines for them.

Entrepreneurs starwho make reinvestments in start-ups with cash they made from selling assets, including shares and management rights, will be allowed to defer paying 10 percent capital gains tax until they withdraw the investments in the start-ups.

Angel investors will receive 50 percent deductions in their corporate taxes if they make investments in start-ups. The deduction percentage is the highest in the world, according to the Ministry of Strategy and Finance, and will get higher if the investment is more than 50 million won.

In order to boost M&As of start-ups, companies that acquire a start-up that is considered to possess innovative technology will get up to 10 percent deductions in their corporate taxes. The deduction percentage will be determined by the value of technologies of the start-ups being acquired.

When a shareholder in a start-up sells his stake to a nonrelative, the seller will be exempted from gift taxes if he bequeaths those assets to his family later. The gift tax currently goes up to 50 percent for a profit of over 300 million won.

The government will create several funds to provide financial support for young entrepreneurs. A 500 billion won Future Creative Fund will be mainly used to support M&As and people starting their own businesses.

Konex, which is scheduled to open on July 1, is expected to be a stock exchange exclusively for start-ups that are having difficulty listing on the Kospi and Kosdaq due to tough requirements.

The new market will have 29 requirements.

The Kosdaq, which was originally created to attract investments for IT firms, has 64 entry requirements. It takes at least three years for small enterprises to be listed there.

To draw investors into the Konex, the government will exempt all capital gains taxes for small investors and lower the tax rates for investors that invest more than 1 billion won.

The government plans to make Konex a market for professional investors who are well aware of risks in technology companies.

Critics wonder if the Konex will be able to be successful since the Kosdaq has been reduced to a market full of bubbles and speculation.

There were mixed reactions to the government’s plan among entrepreneurs.

Some say the plan wasn’t enough to encourage young people who are afraid of creating a start-up with loans.

“The latest plan is still insufficient,” said Lee Min-hwa, honorary chairman of the Korea Venture Business Association. “About half of start-ups shut down in less than five years, and they can’t pay their loans. There should be stronger measures to increase the amount of angel investing.”

Lee said measures to promote M&As are much more important than creating the Konex.

Others welcome the plan, saying it was the strongest they have seen.

“It is the most practical and powerful policy for start-ups,” said Cho Hyun-jung, chairman of Bit Computer.

“There are many negative factors for us, such as bubbles and moral hazards since we are taking on future uncertainties. But we have learned a lot from the first venture capital boom in the early 2000s, and some made history and grew into pretty large companies.”

According to Cho, there are 381 former start-ups with sales that reach 100 billion won.

The Korea Capital Market Institute predicts that the total amount of financial support made by the government and private sector would reach 10.6 trillion won for the next five years.