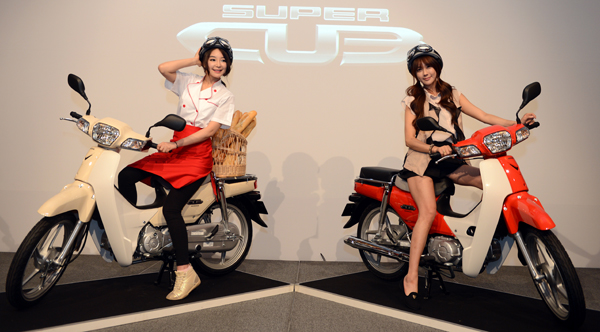 Honda is entering the Korean market for delivery motorcycles with its classic Super Cub model.

“Super Cub is the model that made Honda a global company,” Honda Korea CEO Chung Woo-young said yesterday at the model’s debut in Seoul. “The reason why Super Cub is beloved by consumers around the world is that it has superb economic efficiency, durability and comfort.”

Super Cub was first introduced in 1958 by company founder Soichiro Honda. It has sold more than 76 million units worldwide in 150 countries. In Korea, the model will go on sale in July and the price has yet to be announced. Competing models sell for around 2 million won ($1,800).

Honda said it is targeting small merchants who deliver products. According to its data, the domestic market for small motorcycles with engine displacements of 125cc and under is about 81,000 units. It said 66 percent of them are used for deliveries.

The company once focused on selling large motorcycles in Korea, such as the CBR series, but changed its direction since 2010. It brought in scooters like the PCX and Benly and saw its sales rise more than 30 percent last year to 6,200 units. It hopes to sell more than 10,000 motorcycles annually.