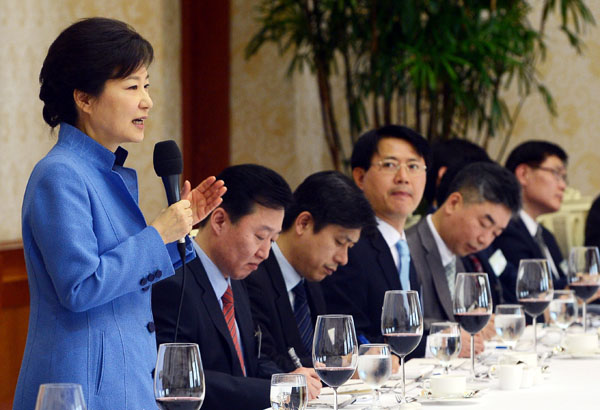 President Park Geun-hye yesterday vowed to modify the shortcomings in her appointment system in the aftermath of last week’s unsavory sexual abuse scandal involving her spokesman.

“I will put forth efforts to have the appointment committee modify the system to conduct more thorough, multilevel vetting,” Park said yesterday at a dinner with political news editors of major media outlets.

Park fired her spokesman, Yoon Chang-jung, in the middle of her trip in the United States after he was accused of sexually abusing an intern during the visit. Shortly after her presidential victory, Park appointed Yoon as her spokesman and brought him to the Blue House, despite fierce protests from both ruling and opposition parties and the media over her pick.

“I chose him based on his professional expertise and hoped to find a new face,” Park said. “But it resulted in an undesirable outcome, and I was very disappointed in him.”

She also vowed to move quickly to conclude the disgraceful scandal involving an alleged sexual assault by Yoon, expressing her regret once again for the incident that overshadowed her premier overseas trip to the United States.

During the trip, Park met with U.S. President Barack Obama and gave a speech before a joint session of Congress. The trip was praised as a success at home and abroad, but the Yoon scandal eventually dominated the headlines.

Park did not hesitate to address the scandal involving her former spokesman. Although she mentioned it briefly, she did point out the incident in her opening remarks.

“I have worked very hard, but it is regretful that an unsavory incident took place toward the end of the trip,” Park said. “We have asked the U.S. authority to investigate the case, so I will quickly go ahead with follow-up measures as soon as the outcome is provided.”

After Park fired Yoon, he came back to Korea, although the Washington police probe still remains open. After his controversial return, Yoon pleaded his innocence and blamed the presidential office for throwing him under the bus.

According to the Blue House, 44 senior editors of newspapers including the Korea JoongAng Daily, broadcasters and news agencies attended the presidential dinner. Senior presidential aides, including Park’s chief of staff, joined the event.

Conspicuously missing among the attendees from the Blue House was the senior public relations secretary, Lee Nam-ki, although he was in charge of media affairs, because he recently tendered his resignation as he was Yoon’s supervisor. Park announced yesterday that she would accept Lee’s resignation.

Yesterday’s dinner was Park’s second attempt to communicate with the press since she took office on Feb. 25. She met with chief editors of major news companies on April 24, shortly after the operation at the Kaesong Industrial Complex was suspended. In yesterday’s opening remarks, Park said her U.S. trip successfully eased concern over the North Korea risk spilling over into the economy. She also stressed she obtained Washington’s support for her North policy and vision for Northeast Asia’s peace and cooperation.