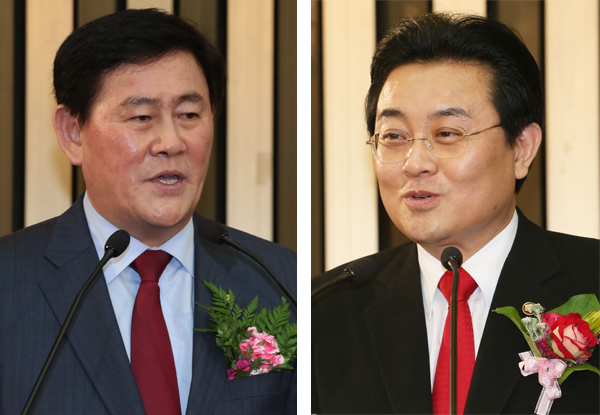 Representative Choi Kyung-hwan, a three-term lawmaker known to have a close relationship with President Park Geun-hye, was elected yesterday as the new floor leader of the ruling party, which commands the 154 lawmakers inside the legislature.

Earlier in the morning, Representative Jun Byung-hun was elected as the new floor leader of the opposition Democratic Party to direct its 127 lawmakers.

The two parties’ floor leader elections took place as they prepare for a major by-election in October.

While the April by-election was relatively small in scale by filling only three vacancies inside the National Assembly, the October election is believed to serve as a mini-general election, as a dozen vacancies around the nation are expected to be created. As of now, trials are ongoing against 13 lawmakers and nine of them belong to the Saenuri Party.

The Saenuri Party’s decision to elect Choi as its new floor leader appeared to come from the lawmakers’ hope to manage a close cooperative relationship with the Blue House during Park’s early months in her presidency.

Of the 154 lawmakers, 146 cast votes yesterday and the Choi-Kim team earned 77, while their rival team of Representatives Lee Ju-young and Chang Yoon-seok won 69.

The outcome was seen as a surprise for many who expected Choi’s side to win by a large margin.

Before the vote, Lee tried to persuade the Saenuri lawmakers that having a Park loyalist as a floor leader will only hurt the party’s image, and the argument appeared to work.

“I honestly thought Choi would win more than 90 votes,” said a lawmaker who said he had backed Choi.

Another first-term lawmaker said the ruling party members increasingly thought it would work unfavorable to the party if it becomes the rubber stamp organ of the Blue House after the recent disgraceful sexual abuse scandal by Park’s spokesman and the subsequent handling by the presidential office of the incident.

Choi started his career as a public servant, but entered politics in 2002 as a special economic advisor to the then-ruling party’s presidential candidate Lee Hoi-chang.

He started his first legislative term in 2004 with the Grand National Party, the predecessor of the Saenuri Party. During the Lee Myung-bak presidency, he served as knowledge economy minister from 2009 to 2011.

A lawmaker representing Cheongdo, North Gyeongsang, the 58-year-old new ruling party floor leader is known as one of the closest associates of President Park.

He served as Park’s chief of staff during the presidential election period last year, but stepped down from the post to save her campaign from a meltdown as reformists of the party insisted that Park loyalists stay away from leadership.

He vowed to serve as a devoted messenger between the lawmakers of the ruling party, the president and the opposition party and asked the Saenuri representatives to unite for the success of the party and the Park government.

While many Park loyalists were criticized for their blind dedication to her, some said Choi might be able to speak his opinions rather candidly.

Political observers said the relationship between the Saenuri Party and the Blue House will be redefined and the presidential office won’t be able to overpower the ruling party in the future.

“I was told by many to check the government properly while making a strong ruling party that can support state affairs,” Choi said after his victory. “I will follow through with the request and do my best to serve the ruling party.”

He also said it is desirable for the president to take the party’s opinions into account when making appointments, asking Park to reform her system.

The main opposition Democratic Party yesterday quickly issued a statement congratulating Choi on his victory, but also issued a pointed message to him.

“There are concerns that Choi will be led by the nose of the Blue House because he is a Park loyalist,” Park Yong-jin, DP spokesman, said. “But we want to see him serve an important role to uphold the separation of power and constitution.”

Earlier in the morning, the Democrats also elected their new floor leader. Representative Jun, a three-term lawmaker representing the Dongjak A District of Seoul, scored a come-from-behind victory, ending the party’s old image marred with factionalism and regionalism.

While Jun is a close associate of former party chairman Chung Sye-kyun, speculations were high that he had supported Chairman Kim Han-gill in the May 4 leadership election and established ties with lawmakers who stayed away from factions.

Jun won 68 votes, beating his close friend, Representative Woo Yoon-keun, by 12 votes in the final match. After the first round of the voting produced no majority winner, a match between the top two candidates, Jun and Woo, took place. During the initial round, Woo beat Jun by three votes.

Woo reportedly was backed by lawmakers from Jeolla and Roh Moo-hyun loyalists, but he was unable to become the new floor leader.

With Jun’s victory, the Democratic Party appeared to solidify its effort to redefine its image as a strong opposition party, moving away from its previous labels. None of the DP Supreme Council includes a lawmaker representing Jeolla, while both Chairman Kim and new floor leader Jun represent districts in Seoul. Among the current DP leaders, Representative Jang Byung-wan, chief policy maker, is the only one whose political stronghold is in Jeolla.

The new floor leader is tasked to show strong leadership to stop the Saenuri Party’s dominance and the expected expansion of power of independent Representative Ahn Cheol-soo.

During his campaign, Jun promised to show powerful leadership to face the ruling party and the Park administration and highlight the largest opposition party’s presence, which was overshadowed by Ahn’s rise to prominence, and the Democrats appeared to have responded.