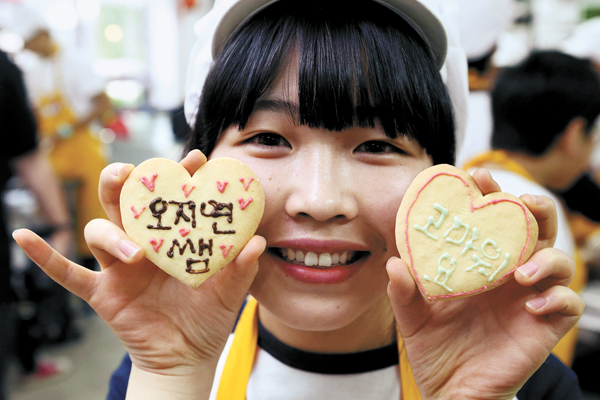 At an event to mark the Teachers’ Appreciation Day, a 17-year-old North Korean defector, named Yun-hui, holds up cookies on Monday as present for her homeroom teacher, Oh Ji-yeon. By Park Jong-keun

ANSEONG, Gyeonggi - “I don’t know how it would feel to be in the arms of my mom, but if I had one, she would be just like you, Ms. Oh. I love you, teacher.”

About 10 students of the Hangyeore High School, an alternative private school for North Korean teenagers who defected into the South, were making cookies for their homeroom teacher, Oh Ji-yeon.

A 17-year-old North Korean defector, who uses her pseudonym, Yun-hui, without a surname, recalled the past year she spent with Oh, while she was making dough and baking it in the oven for two hours.

She presented her finished cookies to her teacher, saying, “You allowed me to act like normal children that have their own mothers. Thank you, Ms. Oh.”

Yun-hui’s mother died when she was 5. Her mother had tried to defect from the regime alone, but got caught by Chinese security guards who repatriated her to the homeland where she was executed.

After her mother’s botched attempt, her elder sister and father were dragged to a labor camp and Yun-hui was sent to an orphanage. Her father also died when she was 11.

After that, the remaining two sisters decided to flee the regime. In January 2008, they successfully crossed the border, and fled to Yanbian, northeastern China, where many ethnic Koreans reside. Avoiding local Chinese guards, they made money by working in fields until they had enough to hire a broker who could help them travel into the South.

In September 2009, they finally arrived in the South, but they had no one to meet them in the capitalist country.

At a local ordinary school, they were outcasts because of where they were from. Yun-hui fought with her sister as well, and as a result, she has been separated from her.

“I thought I was alone in the world,” she said. “I thought there would be no one that I could trust.”

However, it was the 32-year-old female teacher who first approached her. Oh, who started teaching at the school in 2010, became her homeroom teacher last year.

She called her in for counseling frequently. During weekends, she sometimes brought her to local coffee shops and chatted with her. Whenever Yun-hui suffered through problems, the teacher held her hands and listened to her while making eye contact.

“Love can be delivered through body temperature and eye contact,” Oh said. “I thought what Yun-hui needed most was someone to pay attention to her.”

However, Oh was strict in punishing her misbehavior. In September, when Yun-hui didn’t return to the dormitory of the school, the teacher bitterly scolded her. “It was also hard for me to be cold to her,” Oh said. “But I wanted her to be independent and face the reality of living in the real world.”

During the past year, Yun-hui became a bright girl. Her average exam scores rose by 30 percentage points.

Starting in May, Oh started to manage an orchestra formed by roughly 70 young North Korean defectors attending the school. The director is Gum Nan-se, a renowned South Korean director, with sponsorship from the Korean Red Cross. The name of the orchestra is “Windmill for Hope.” Yun-hui also belongs to the orchestra.

On Friday, some members of the orchestra, including Yun-hui, held a surprise music concert for Oh, with violins and violas. The song they played was “Gratitude to Teacher,” a popular Korean song to express appreciation for teachers ahead of Korea’s Teachers’ Day. After the performance, the students all rushed to Oh and hugged her together, saying “I love you, Ms. Oh.”