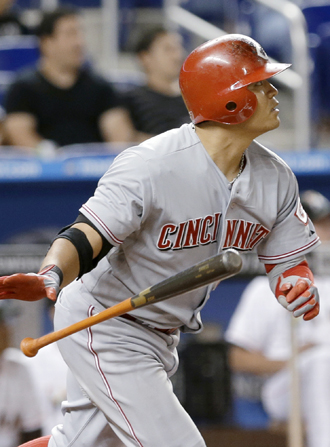 Cincinnati Reds’ Choo Shin-soo watches his solo home run against the Miami Marlins in the fourth inning in Miami, Wednesday. Choo hit another solo home run in the sixth, giving him nine this season. [AP/NEWSIS]

MIAMI - Choo Shin-soo’s first home run landed in the nightclub beyond the left-field fence, catching by surprise revelers distracted by the Miami Heat on television.

His second homer dropped into the right-field bullpen amid Marlins relievers, who saw the ball coming.

Clearing the hard-to-reach fence both ways, Choo went 4 for 5 Wednesday and helped the Cincinnati Reds extend their winning streak to a season-best five games by beating Miami, 4-0.

Mike Leake and three relievers combined on an 11-hitter for the Reds.

Choo hit solo homers in the fourth and sixth inning, giving him nine this season. His ninth career multihomer game came in a spacious stadium where sluggers tend to struggle.

The two-homer effort was his second in eight days, but he came into the game batting only .225 in May.

“I haven’t been feeling great,” he said, “but tonight I hit the ball on the barrel.”

Leake (3-2) went six and two-thirds innings, pitched around nine hits and lowered his ERA to 3.72.

Reds ace Johnny Cueto is expected to return next week after being sidelined since mid-April by a sore arm, and manager Dusty Baker bristled when asked if Leake’s performance saved his spot in the rotation.

“Who’s talking about keeping his spot?” Baker said. “He’s doing better than some of the guys on our staff. I don’t understand why it was coming down between him and somebody else anyway. Leake has pitched well. It shouldn’t have been thought of. We’ll worry about that when we get there.”

Leake walked one and hit a batter. The Marlins had 14 baserunners but stranded 12 and hit into two double plays.

“I definitely was out of the stretch quite a bit,” Leake said. “They hit a few balls hard, but a few of them weren’t hit too hard.”

Miami managed three infield hits among their 10 singles, but went 1 for 10 with runners in scoring position.

“We’re just not getting it done,” manager Mike Redmond said.

“I don’t know how to dress it up any more than that.

“I’m trying to be patient, but at the end of the day, somebody’s got to step up and get a hit with a guy in scoring position.”

With the home team giving the crowd of 14,866 little to cheer about, the biggest roars came when highlights of the Heat’s playoff victory over the Chicago Bulls two miles away were shown on the video scoreboard.

The Marlins were shut out for the seventh time, most in the majors.

Cincinnati climbed a season-high eight games above .500 and improved to 5-1 against Miami, which has lost four in a row.

The Marlins fell to 0-10 this year with the retractable roof open in their stadium. The ball carries better in those conditions, and Choo twice sent it flying off Alex Sanabia (2-6).

Choo also led off the game with a single and scored on a double by NL RBI leader Brandon Phillips. Joey Votto added two hits and an RBI for the Reds, who improved to 20-6 when they score first.

Choo’s four hits tied a career high, and he raised his average to .322. He improved to 5 for 5 lifetime against Sanabia.

The Reds led 4-0 in the seventh when Miami mounted a threat. With runners at second and third, Sean Marshall came on and struck out rookie Derek Dietrich with a 3-2 curve to end the inning.

Miami put two runners aboard again in the ninth.

Aroldis Chapman then threw seven fastballs of at least 100 mph to Dietrich, who finally struck out looking on a changeup.

“That guy can bring it,” Dietrich said. “He made a great pitch when he needed to.”

The Marlins rank last in the majors in wins at home, where they’re 5-13.