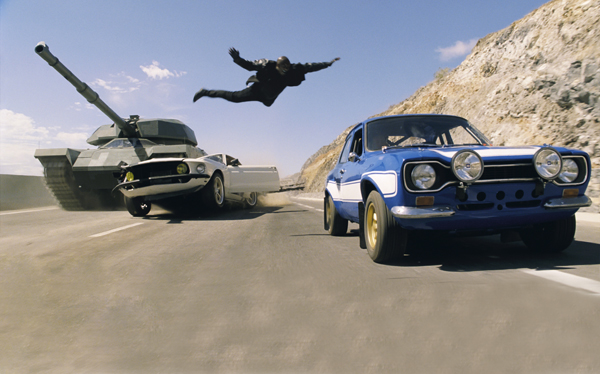 “Fast & Furious 6” is jam-packed with action scenes and boasts some of Hollywood’s hottest action stars. Provided by UPI Korea

Car enthusiasts will rejoice to hear that “Fast & Furious” is back again.

To promote the sixth installment in the drag-racing-meets-heist franchise, four stars from the film - Vin Diesel, Michelle Rodriguez, Luke Evans and Sung Kang - touched down in Seoul early this week to talk about the movie that has fans hyped up.

Diesel, passionate about the film franchise that launched his career some 12 years ago, is not just the film’s lead actor but its producer too.

Reflecting on the continuous success of the movies, he said that he’s just grateful for the love.

“There’s a part of me that doesn’t know why we’ve been so fortunate and blessed,” said Diesel.

But if he could pinpoint a few factors after a decade, Diesel said he would pick the sneak preview of what’s to come that leaves fans hankering for more.

“We continue the movie. You can imagine where we’re going to go [in the next movie],” said the 45-year-old.

And along with fast cars and scenic locations, Diesel said he believed the film’s diverse cast resonates with global audiences.

“It’s a multiethnic saga. [It] represents the new millennium. It doesn’t matter where you’re from. If you are in the FF family, you are in the family,” he said.

Over the years, the franchise has indeed featured a diverse range of actors from Hispanics and African-Americans to Asian characters, something that is often missing in Hollywood productions.

Korean-American Kang, who joined the cast in 2009, chimed in, saying that he too was proud to be a part of the “family.”

“It will be sad if I don’t make it in the next film, but this is FF, which means characters can even come back from the dead,” said Kang on being asked about the future direction of the series.

And speaking of resurrections, Rodriguez could hardly contain her excitement about being back after dying in the fourth film.

“Disappearing from the franchise that introduced me to Hollywood was a very sad moment for me,” said Rodriguez, who found out through watching the last film in Paris that she would be a part of the new feature.

Back on the action-packed set, Rodriguez admitted there was a new challenge awaiting her: a fighting scene with mixed martial arts champion Gina Carano.

“Fighting scenes in ‘Kill Bill,’ ‘Crouching Tiger’ are not really believable,” said Rodriguez, who felt “big pressure” to stand her own as a female action star against her male co-stars.

“Me and Justin Lin [the director] had a strong conversation about making a fight like this believable. And the two decided that Carano’s character was a tactical fighter while her character Letty was more animalistic.” 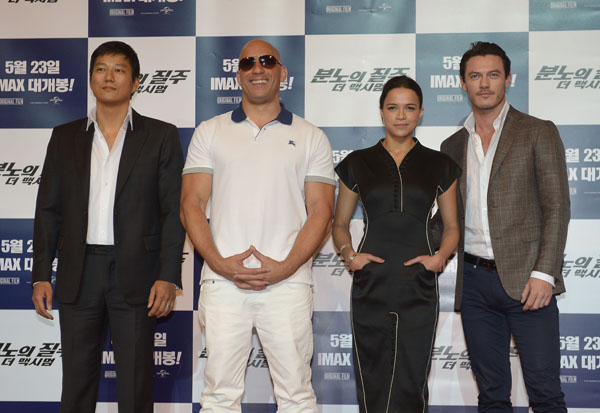 From left: Sung Kang, Vin Diesel, Michelle Rodriguez and Luke Evans said they loved Korea while on a promotional visit this week.

Another new element in the sixth installment is Welsh actor Luke Evans, best known for portraying characters from Greek mythology.

On taking on a more contemporary role, Evans said he was “over the moon to be a part of the franchise.”

And it’s not just Evans who’s glad that he’s joined the cast. When the stars touched down in Seoul on May 10, there was a throng of female fans waiting for him. On his newfound fame in Seoul, Evans confessed it was something he never experienced before.

“For the first time I had fans waiting for me,” he said.

And while Rodriguez teased her co-star by saying that she’d give out his number to the women of Korea, Diesel reminded all just why the stars were in Korea.

“Korea is a very important film market in this world .?.?. so the opportunity to just come to Korea and present this passion project .?.?. we take it very serious and we are very grateful that we can present this movie and show it.”

And as is the style of late, Diesel made a pledge that he will carry out if the film turns out to be a hit.

“If FF6 breaks all records in Korea, we’ll invite another Korean actor to be a part of the franchise,” he said.

If that wasn’t enough, Diesel also opened up about the possibility of filming the next film in the country.

“Now that we came here, we could some day find ourselves here in Korea. The studio wants us to map out the next three films, and the idea of coming to shoot in Korea could be interesting,” he explained.

Although an off-the-cuff comment, Diesel admitted that all previous films began with “somebody asking them to come to their country.”