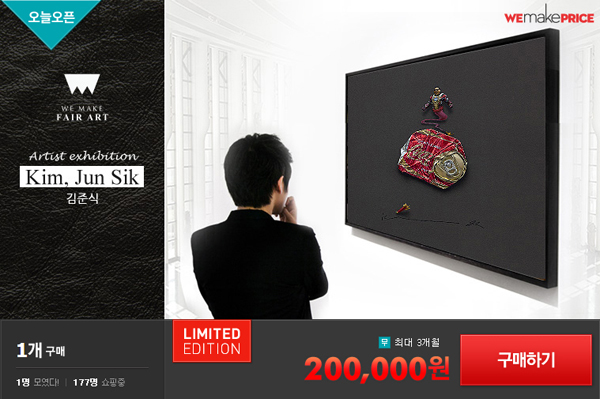 A captured image from the “We Make Fair Art” section of the social commerce venture “We Make Price.” provided by the organizers.

Efforts are going on to popularize contemporary fine art, which is still considered to be exclusive for connoisseurs or wealthy collectors.

It is “We Make Fair Art” project that the social commerce venture launched in cooperation with Gana Art, one of Korea’s biggest galleries, last week. 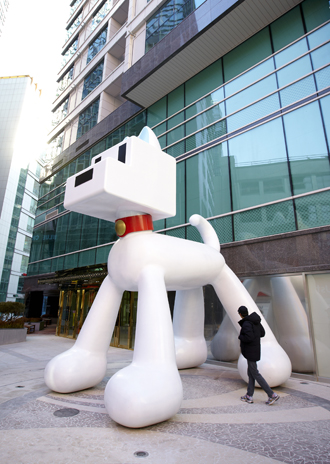 “Doggie Dog” sculpture by pop artist Dongi Lee is installed at I-Park 1 building in southern Seoul where a small-scale art fair “Flat Take I” is held through Sunday.

Gana Art will continue to select the artists, whose works’ prints will be sold on the e-commerce site through a committee of its curators and outside critics. The selected artists will get the right to enter the gallery’s residency program, while receiving a part of the revenues from the digital print sales.

And small-scale art fairs are taking place to lure collectors with relatively light purses. “Flat Take I” fair, which started yesterday, will continue through Sunday at the I-Park 1 building in southern Seoul.

Eleven art galleries including Sun Contemporary and Gallery 101 and six designers’ studios and several non-profit groups of artists are participating in the fair.

Sejong Center in central Seoul is also holding a small-scale art market in its backyard on every first and third Saturday of each month, beginning this month.

Meanwhile, 60 institutions among private art museums nationwide, will extend their opening hours to 12 hours between 10 a.m. and 10 p.m. on Saturday as a one-day event, in efforts to attract the public to museums.

They include Kumho Museum of Art and Artsonje Center in central Seoul, Ilhyun Museum in Yangyang country of Gangwon province and Daesan Art Museum in Changwon city of South Gyeongsang province.