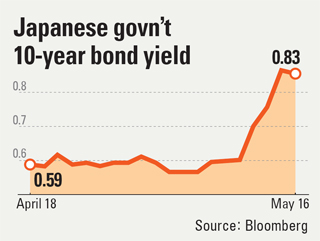 Benchmark 10-year Japanese government bond yields reached 0.92 percent Wednesday, the highest since April 2012. That put the rate above the 0.7 percent year-end forecast by analysts in a Bloomberg News survey. The rate later pared gains after the central bank announced a 2.8 trillion yen ($27.4 billion) infusion of funds. Analyst forecasts for 10-year U.S. Treasury yields are at 2.2 percent compared with the current 1.94 percent.

Kuroda’s doubling of bond purchases last month to achieve 2 percent inflation in two years has failed to cap borrowing costs, with the 10-year yield rising the most since August 2003 in the three sessions through May 14. Toyota Industries joined Lixil Group in canceling debt sales this week due to market volatility, casting doubt on the BOJ’s plan to boost investment and growth by keeping borrowing costs low.

“It’s probably not realistic for the BOJ to think that it can keep bond yields low despite monetary easing aimed at 2 percent inflation because it buys” lots of JGBs, said Takeshi Minami, chief economist in Tokyo at Norinchukin Research Institute. That’s “contradictory.”

The swing between high and low 10-year JGB yields on April 5, the day after the BOJ expanded stimulus, was 30 1/2 basis points, the widest since July 2003. The benchmark rate surged 25 1/2 basis points, or 0.255 percentage point, in the three sessions ending May 14, the steepest three-day increase since August 2003.

“The BOJ’s operation is too infrequent and too big,” said Shogo Fujita, the chief Japanese bond strategist in Tokyo at Bank of America Merrill Lynch, one of the 24 primary dealers obliged to bid at government debt auctions. “The operation is so big that it threatens to break the market, and uncertainty on when it might happen is regarded as a risk.”

The central bank buys bonds about eight times a month for a total of at least 7 trillion yen, according to a statement last month.

Elsewhere in Japan’s credit markets, JPMorgan registered to sell as much as 500 billion yen of Samurai bonds, according to a filing yesterday with the Ministry of Finance. The U.S. bank offered 161.5 billion yen of the yen notes in February 2012, according to data compiled by Bloomberg.

Samurais, which are yen-denominated bonds offered in Japan by overseas borrowers, have handed investors a 0.26 percent loss this month, according to Bank of America Merrill Lynch data. That compared with a 1.5 percent drop for Japanese government notes and a 0.58 percent decline for domestic company paper.

Japan’s currency has lost 21 percent in the past six months, the worst performance among 10 developed-market currencies tracked by Bloomberg Correlation-Weighted Indexes.