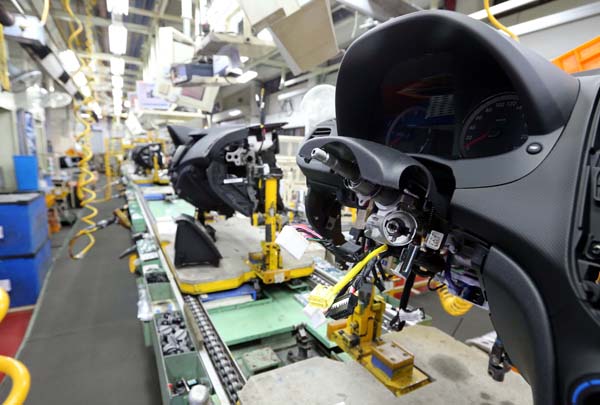 A Hyundai Motor automobile production line in Ulsan. The automaker is once again engaged in conflict with its labor union, which is demanding that 30 percent of the company’s profit should be distributed as bonuses to workers. The union also wants to extend the retirement age. By Song Bong-geun

The union for Hyundai Motor’s regular employees, which has 45,000 members, on Wednesday revealed its agenda for this year’s negotiation. It included a 130,498 won ($117) monthly base pay increase and 65 other proposals.

Industry insiders said many of the union’s demands were unlikely to be accepted by management.

The union asked management to allocate 30 percent of company’s net profit to be used as bonuses for workers. If applied to Hyundai’s net profit from last year, 9.05 trillion won, each union member could get a 60 million won bonus.

That figure also includes profits from the automaker’s plants overseas.

“The union’s claim is that it wants to receive some of the profits that overseas workers have earned,” an official from Hyundai said.

To protect their jobs, the union also asked for a significant revision of its previous agreement. A management-union joint review committee screens the company’s plans to build or expand overseas plants, but only if the action affects jobs of union members. The union wants to delete that condition, meaning that it will have a say in all overseas plant construction.

According to industry sources, the average salary for a Hyundai employee is 94 million won. However, worker productivity has fallen in recent years. According to company data, Hyundai’s Ulsan plant needs 31.3 hours to produce one vehicle while the Alabama plant in the U.S. only requires 14.6 hours and the Beijing plant uses 19.5 hours.

Since March, Hyundai has been suffering a serious production decline in Korea because the union has not been working weekend overtime hours. According to the automaker, the estimated cost after 10 weekends is more than 1 trillion won.

Workers there are asking to reduce their work to 8.5 hours while keeping the same pay. For weekend overtime, employees are asking to work 12 to 14 hours because they have higher pay for overtime.

“Although it’s just a proposal, the union’s demands are too far from reality,” a Hyundai official said. “Especially union members from the Jeonju plant who wants the same pay for reduced work are irrational.”

The company also has to deal with the union for nonregular workers, which has protested in front of Hyundai’s headquarters in Yangjae-dong, southern Seoul, three times this year asking for their status to be changed to regular workers.

On Wednesday, an estimated 4,000 nonregular workers and members of the Korean Metal Workers’ Union occupied the streets in front of Hyundai’s headquarters. No severe injuries were reported.

Hyundai also announced last year it will upgrade 3,500 nonregular employees to full-time employment by 2016. The union wants the upgrade for all 8,500 temporary workers.