Like the phoenix, business regulations in Korea never expire

Like the phoenix, business regulations in Korea never expire 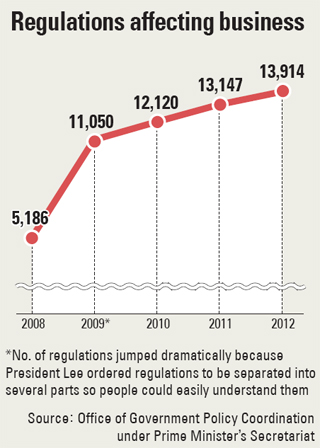 One recent afternoon at a comic book store in Sinchon, northwestern Seoul, the owner pours boiling water into a cup of instant noodles ordered by one of his customers. He looks nervously at the door. It’s a violation of food safety regulations for the store owner to serve noodles or even coffee, and random inspections occur all the time.

Fortunately, the owner won’t have to worry much longer because the Office of Government Policy Coordination under the Prime Minister’s Secretariat decided to lift that regulation. It was harming mom-and-pop shops like comic book stores and Internet cafes.

In contrast, a stationery store in front of an elementary school in the Yuseong District of Daejeon is feeling the pinch these days from another rule by the Ministry of Food And Drug Safety.

It recently prohibited stores located within 200 meters (656 feet) of schools from selling snacks and ice creams starting in second half of this year.

Cheap snacks are often adulterated, and the Park Geun-hye government designated adulterated food as one of four major evils afflicting society, along with sexual violence, bullying and domestic violence.

But for small stationery stores, as much as 80 percent of their revenue comes from 200-300 won snacks.

The National Police Agency and Food and Drug Safety Ministry are promising crackdowns on adulterated snacks, although they haven’t even properly defined what they mean.

Every time power changes hands in Korea, the issue of regulations of businesses rises anew.

Government regulations are meant to maintain market order, correct wrongs, protect consumers and stimulate the economy. But critics say the number of regulations increase dramatically when new governments are sworn in.

The government of predecessor Lee Myung-bak pledged to slash regulations but ended up doing the reverse.

There were a total of 5,186 corporate or business regulations when the Lee administration was launched in 2008. Lee asked for the regulations to be disentangled to make them easier to understand, which led to a spike in the number to 11,050. By the end of last year, the number of regulations reached 13,914, meaning almost 3,000 new regulations were created by Lee’s government.

Critics say new regulations are created and old ones continue on. Lee said his government was going to “pull out electrical poles from the streets,” or get rid of unreasonable and outdated regulations, but it didn’t happen.

A special law created to curtail air pollution in metropolitan areas is a case in point.

Under the law, companies are required to seek permission when they want to establish or modify facilities that release more pollutants than the government’s discharge limit. The law, which was originally enforced in January 2007, was toughened in July 2009. The corporate sector says the law went way too far and has pleaded with the government to scale it back.

The Ministry of Environment is scheduled to reconsider the law on June 30, but chances are high that no changes will be made.

“We will decide the matter after considering various circumstances, but we’ve set our direction to keep the law,” said Jeong Bok-young, an official at the ministry.

There’s another regulation that prohibits universities in metropolitan areas from relocating to nature conservation areas in the city. Some regional governments have urged the central government to revise the law to allow it.

The revision was approved by a vice ministerial meeting on April 26, but the final passage by the cabinet was suspended after complaints by environmentalists.

Hyun Oh-seok, deputy prime minister for the economy and finance minister, said after a May 1 trade and investment meeting that the government will not change the regulations.

Once regulations are created, they earned the nickname of “phoenix,” critics joke, because they never die.

Government after government has promised regulation reforms but has not gotten far.

“Through a committee review on administrative legislations regarding regulations, the government curbs unreasonably tough regulations and the birth of new regulations,” said Kim Choong-ho, an official at the Office of Government Policy Coordination under the Prime Minister’s Secretariat. “Every year, the committee recommends changes or abolishment of 50 percent of existing core regulations.”