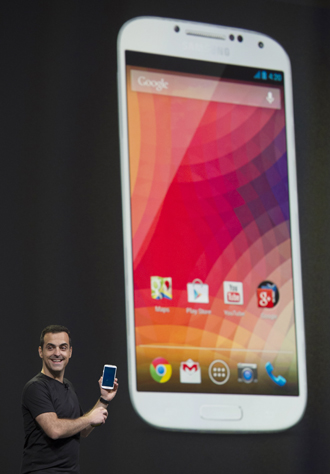 Google has made Samsung Electronics’ Galaxy S4 flagship phone into its latest “reference phone” and will start selling it for $649 through its Google Play online store June 26 in the United States.

The reference phone, mostly used by developers and techies, is a phone that uses a pure version of Google’s Android operating system. On other phones that run Android, the manufacturer tweaks the operating system to its requirements. So the Google edition S4 - with 16 gigabyte storage - will have a user interface designed by Google, not Samsung.

Previous Google reference phones carried the Nexus brand name, including the Nexus 4, which was made in partnership with LG Electronics, and the Galaxy Nexus, made by Samsung.

The new reference phone, which will be called the Galaxy S4 GE, will not be called a Nexus. It is the first reference phone to run on fourth-generation, long-term evolution (LTE) networks via T-Mobile and AT&T.

Google has been launching reference phones since 2010. They serve a standard for developers of Android smartphones, tablet PCs and mobile applications.

The announcement indicates a tightening partnership between Samsung and Google, reversing speculation that Samsung is trying to distance itself from the world’s most popular Android smartphone platform by stepping up development of its own operating system.

“Samsung is, for now, the undisputed king of the global Android smartphone industry,” said Neil Mawston, executive director at Strategy Analytics. “We believe Samsung generates more revenue and profit from the Android platform than Google does. Samsung has strong market power, and it may use this position to influence the future direction of the Android ecosystem. For example, Samsung could request first or exclusive updates of new software from Android before rival hardware vendors.”

Despite a good reception overseas, Galaxy S4 is showing less than impressive sales record at home since its debut last month. It has sold less than 200,000 units - much worse than its predecessor - as consumers take a wait-and-see attitude toward the new phone. Korean smartphone buyers saw the price of a Galaxy S3, which started off close to 1 million won ($896), tumble to almost one-fifth the level in less than a month after its release as mobile carriers scrambled to offer discounts. Prospective S4 buyers are waiting for discounts. Even Samsung insiders are vaguely hoping for one of the three carriers to start discounting, although some of their discounts are actually illegal.

“The Galaxy S4 has been so unpopular here that I wish a telecom company would volunteer to end the trouble by offering a hefty subsidy,” a source at Samsung said.

Still, the Korean market accounts for only 10 percent of global sales for Samsung, so S4 sales here won’t have a major impact on overall sales, analysts say. While it took 20 days for the Galaxy S3 to see 3 million units sold around the world, the S4 posted sales of 4 million in just five days after its release. The S4 is expected to hit 10 million units in sales by the end of this year.