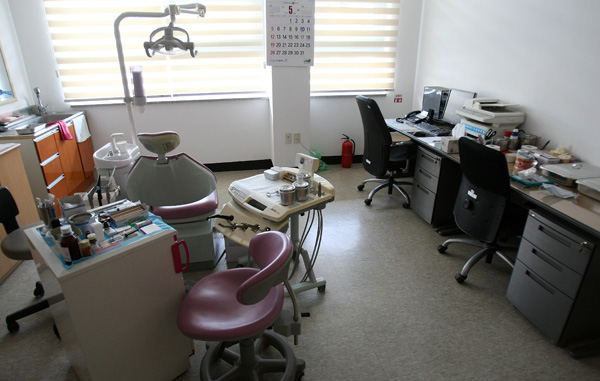 A dental clinic is empty on Wednesday at a public health center in Gunwi County, North Gyeongsang after a public doctor ended his service, which was in place of his mandatory two-year military service. By Gong Jeong-sik

If 66-year-old farmer surnamed Lee, who lives in Cheongyang County, South Chungcheong, wants to see a dentist, he has to get on two buses and ride for an hour to get to the Gongju Medical Center.

Lee lives in Cheongyang’s Cheongnam neighborhood, where nearly half of the 2,000 residents are in their 60s and older. Despite the number of residents, there is only one public health center run by the county office and only one public doctor.

The doctor, who is practically responsible for the 2,000 residents, comes to the Cheongnam neighborhood every Friday on a clinic tour. But that is far short of meeting the medical demands of the residents.

“I could not sleep at all last night because of a toothache,” Lee said while he was waiting for a bus to go to Gongju. “To pull a tooth, I have to travel all the way to Gongju because we have no dentist here.”

Another public doctor at one regional branch of the public health center in Gunwi County, North Gyeongsang, is the only doctor for 2,167 people in the Ubo neighborhood and surrounding areas in the county.

The 29-year-old doctor named Kim Dong-su told the JoongAng Ilbo that because of the medical staff shortage, it is not unusual for patients to seek treatment late at night, any day of the week.

The problem is more acute for dental service as there are no dentists in the region serving at public health centers.

The number of public doctors is steadily declining, and as a result, local residents are taking a direct hit from the shortage of doctors in rural areas.

But as the number of such doctors has gone down this year to 3,890 from 5,287 in 2009, an increasing number of local residents are being denied medical care. Worries have grown that the lack of regional medical staff will get worse as the number is expected to go below the 3,100 mark soon.

Experts point out many rural regions will be devoid of medical service if the understaffed situation continues. 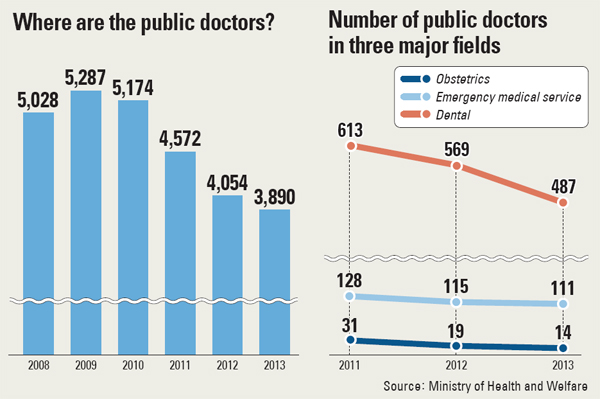 Female medical school students, who are free from mandatory military service, now comprise almost 40 percent of students at medical schools in the country.

According to the Ministry of Health and Welfare, among 2,056 students at graduate medical schools, only 14 percent of them have not done their military service, while 53.2 percent of them are female students.

The problem is especially acute for obstetricians, whose general number has plummeted amidst dropping birth rates. There are only 15 public obstetricians dispatched at public health care centers.

“Such a deep decline in the number of obstetricians is a direct result of low birth rates in the country and a preference for female obstetricians among pregnant women,” said Kim Young-kil, director of the welfare policy team at the North Gyeongsang Provincial Office.

The government estimates there are 48 areas designated as vulnerable rural areas for childbirth, where a pregnant woman has to drive over an hour to see an obstetrician.

To make up for the doctor shortage, most doctors at public centers go on a clinic tour, visiting a number of rural regions in a day to treat local residents.

“I usually get exhausted when I wrap up my clinic tour, which spans long distances,” said 29-year-old public doctor Kang Kil-su of the Chuncheon Public Health Center in Gangwon.

The government says the problem is likely to continue as it estimates it will take about 10 years for the number of public doctors to return to a normal level seen in the past. And government officials have no palpable solutions to fix the shortage problem, other than waiting for an increase in male medical students who have not done their military service.

“As many universities are going back to the conventional medical school system [in which students are admitted to a six-year medical school program as undergraduates], we expect the number of public doctors to rise by 2020,” said Park Jung-bae, director of the health policy bureau at the Health Ministry.