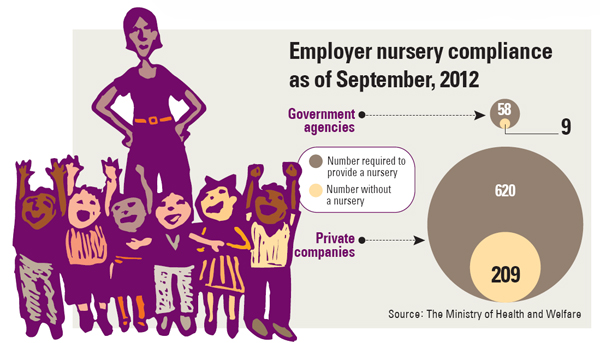 As the Park Geun-hye administration has pledged to help working moms balance work and family life, it looks to place more pressure on employees to offer in-house day care.

A key government official yesterday told the JoongAng Ilbo that “the Park administration will unveil a new plan to expand the number of day care centers as early as the end of May.

Under the current law, establishments with more than 300 female workers or 500 regular employees are required to provide a nursery facility.

But, when it comes to private companies, 33.7 percent of them fail to comply with the rule.

Experts cite a lenient penalty imposed on those breaching the regulation as well as little incentive as possible causes.

It was not until 2011 that the list of private companies not following the rule was announced.

The list, announced by the Welfare Ministry, was the result of a plea from a civic organization.

The source, who spoke on the condition of anonymity, added that the upcoming initiative, with an estimated 58.1 billion won ($52.1 million) allotted, will include tougher punishments and more financial subsidies for more employer-supported facilities to be built.

The high satisfaction rate of the day care facilities built by employers prompted the government to advocate for them.

The Ministry of Health and Welfare found that an on-site facility came out on top in a research measuring satisfaction, followed by the public facilities.

“The research shows that parents taking their child to an employer-run facility are the most satisfied with the service,” said another high-ranking government official.

“So far, those with more than 300 female workers or 500 regular workers are required to have their own nurseries,” the source said.

“But we want more companies to have those facilities.”

The source hinted at the possibility of opening a joint nursery between multiple smaller companies that have fewer employees.

Another reason why the government has focused on the role of the employer-sponsored service lies in public day care centers’ inability to meet the demands.

Many parents know what it is like to see their children shuffled to the bottom of a long waiting list for public child care.

A working mom living in Mapo District, western Seoul, almost gave up on taking her child to a state-run nursery when she found out there were 288 children on the waiting list.

“It seems that it’ll take four to five years for the facility to take my child,” she said.

“The government talks about free day care service, but the paltry financial subsidy is meaningless when I have nowhere to leave my child while I’m working,” she said, adding that she is now considering quitting her job due to the burden of caring for her kids.

Even if one finds a way into a day care center, a bumpy road is ahead for working moms.

“Most of the children in the center leave for home around 4-5 p.m. But I can’t make it by that time,” said a working mother from Seocho District, southern Seoul.

“Whenever I pick up my child late, he looks so exhausted. I’m worried that the teachers treat him badly because I always pick him up late,” she said.

She is now spending 1 million won per month to hire an assistant worker to pick her child up at an earlier time.

Many observers see the Park administration is taking seriously the heavy burden placed on working mothers.

She once visited an on-site nursery provided by the Korea Exchange and said that “I hope that many companies provide this kind of decent service for working moms.”