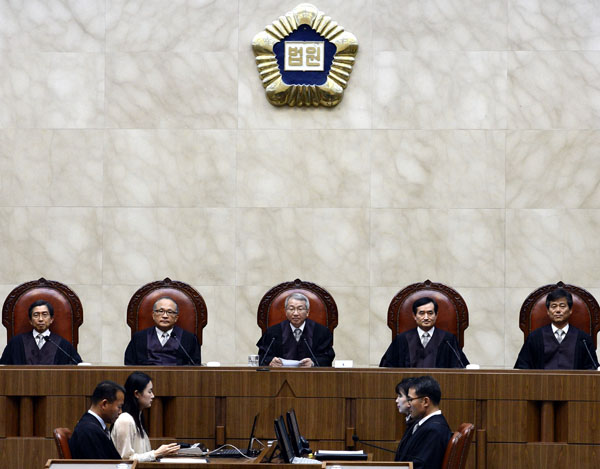 In the landmark ruling, the Supreme Court upheld the high court conviction against the man for three counts of spousal rape. The husband was convicted of threatening his wife with a knife then raping her.

The Supreme Court also upheld the lower court’s decision to jail him for three years and six months for the crime. His personal information will also be made available to the public for seven years, and he was ordered to wear an electronic anklet for 10 years once he completes his prison term.

Until now, the courts have handed down a handful of spousal rape convictions, but those couples’ marriages were invalidated in some way during the legal procedure.

Yesterday’s ruling marked the first conviction of a rape between a husband and wife who are maintaining the marriage throughout the legal process.

“It is significant because the ruling focused on protecting the right to sexual autonomy for the wife and reflected the changed perceptions toward marriage and sex,” a Supreme Court official said yesterday.

The husband, only identified as Kang, was married to the victim in 2001 and the couple has two children.

In 2011, the husband used a kitchen knife to threaten his wife and raped her after they had an altercation.

Two more rapes accompanied by armed threats took place after that, and the wife’s family filed a complaint to the prosecution later that year. Kang was investigated and prosecuted under detention in November 2011.

Kang was found guilty of marital rape in the initial trial and was ordered to serve six years in prison. In his first appeal, he was once again convicted, but the Seoul High Court lowered the punishment to three years and six months.

He still took the case to the Supreme Court, appealing that a wife cannot be a victim of rape under the Korean criminal code.

Taking into account the legal significance and sensitivity of the case, the Supreme Court made a rare move by holding a hearing last month and listened to the two sides’ arguments.

The ruling also set a precedent that a wife is included in the definition of “female” in a rape charge. Article 297 of the criminal code said, “A person who, through violence or intimidation, has sexual intercourse with a female, shall be punished by limited imprisonment for not less than three years.”

While marital rape has been punished in major Western countries including the United States, Germany and France for decades, Korea, like many other Asian countries, had granted a marital exemption, but yesterday’s ruling set a new precedent.

Two charges of spousal rape reached the Supreme Court before this case, but the court acquitted the suspect in the first case in 1970, granting him a marital exemption.

In another case in 2009, the man was convicted of the crime, but the couple had already agreed to a divorce, so it was not seen as a marital rape.