By day or night, Busan more than just beaches

By day or night, Busan more than just beaches 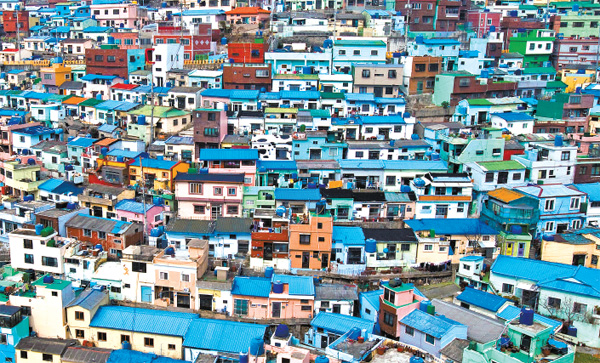 There’s a saying that during the summer, parents in Seoul will ask their kids: “Would you like to go to Busan?” The kids will say: “No. Let’s go to Haeundae.”

The beach-front suburb is no doubt an iconic holiday spot that Koreans associate with summer vacation, not to mention the scenery that Busan conjures up for most.

But the truth is Korea’s second-largest city, located 329 kilometers (204 miles) from the nation’s capital, has so much more to offer than just its beaches.

Even with just one weekend, travelers are able to experience it all - from the sand to the turf - and get an overall perspective of the city’s unique history and culture. Those who have visited Busan before may find the itinerary below refreshing as they tread where the locals do.

Upon arrival, there is nothing like a hot steaming bowl of pork rice soup to give you the energy to power through the day. A specialty of the south Gyeongsang area, pork rice soup is similar to seolleongtang - beef and bone stock soup. Throughout Busan, there are restaurants that serve up the pork dish. Surprisingly not as greasy as you’d expect, the dish has bits of sliced pork and is accompanied by various kimchi. It is loved by locals and tourists alike.

Bonjeon Dwaji, or “Principal Pig,” located near Busan Station (opposite the Samsung Life Building), is the place to try the local specialty.

It’s not uncommon for those who just got off the train to head straight there, as a queue is almost de rigueur around lunchtime, but it does move fast.

There are various derivatives of the dish on the menu from the original pork soup to sundae (Korean blood sausage) soup, among others.

An area of Busan that will leave all a bit nostalgic for their school days is the Bosu Book Street. There is a large collection of secondhand books for sale, a lot of them 40 to 70 percent cheaper than the original retail price.

Locals are fond of the area and it is practically a rite of passage for them to trade in their old books there.

The marketplace was established by Song Jung-lin, a North Korean refugee who settled in Busan after the 1950-53 Korean War.

He started his business with whatever he could manage to scrape together from the American military base when Busan was the wartime capital. It wasn’t long before other refugees began selling similar wares and the area became the city’s literary hub.

The area was booming in the ’60s and ’70s, with some 70 stores on the 150-meter stretch of road. Sadly, much like other secondhand book stores throughout Seoul, the area is being hit hard by the surge of online booksellers.

There is also an information center on the main road which explains the district’s history with pictures of the street during its heyday. It’s a scenic stroll which may take longer than planned - you may spot a title and wonder if you’ll see it again.

The name derives from the market’s history, again from the time when refugees would sell items taken from the U.S. military base.

Originally these were canned goods, but it wasn’t long before everything under the sun amassed there. 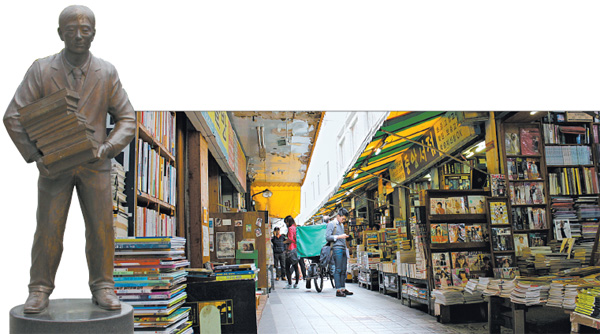 A walk through Bosu Book Street is a nostalgic experience for many. Provided by Busan Tourism Organization

Locals as well as tourists like to look around for slashed prices on imported biscuits to children’s clothing as well as posters of Hallyu stars.

Across the road, there is also the International Market, again selling similar items with an added bonus of traditional snacks like Korean-style doughnuts, hotteok, or cinnamon pancakes, and noodle bowls.

Gal Maet Gil is the scenic trail that winds its way around the coast of Busan. With a length of 263.8 kilometers (163.9 miles), the nine Gal Maet Gil routes are divided into two or three shorter segments covering the coastal, riverside, forest and downtown paths weaving in and out of the city.

The name combines two words: galmaegi, meaning “seagull” and gil, meaning “path”; throughout the city, you can see signposts pointing toward the nearest trail.

One of the most picturesque parts of the trail, a bit out of the way, can be found in western Busan, in Annam Park in Songdo.

Igidae Galmaetgil is one of nine trails that wind their way around the coast of Busan. [JoongAng Ilbo]

Walking along the 800-meter coastal fringe, you can see Du Island and as the waterway is one of the widest in Busan, countless ships are moored there. The view from the top is breathtaking as you climb up, down, and across the wooden bridges that join the walkway.

Along the wall, there are also various plantations. Not too long ago a local found a rare orchid there and cashed it in for 25 million won ($22,467). Since then, more locals are taking a closer look at the rocky wall as they take their leisurely strolls.

Every October, there is a walking festival in which about 14,000 people take part. The suburb also boasts a beach that is popular in the summertime for swimming.

From Busan Station, take bus 134 to Nampo-dong, then transfer to bus 71.

The artiest part of town, the Gamcheon Culture Village is not what you’d expect from the nation’s seaside capital.

It’s been called the “Santorini” of the South Sea and the Machu Picchu of Korea.

It owes its heritage to refugees and the Taegeukdo religion - some 4,000 followers of the movement having settled there after the Korean war in the 50s.

Since 2009, when the government began to revitalize the lower socio-economic area, the shanty neighborhood underwent a very colorful makeover with installation works and murals on every wall.

There are some 4,500 families that call Gamcheon home, so tourists are asked to keep quiet as they make their way around the winding neighborhood.

As well as displays of the Little Prince, poetry, and rooms depicting “peace” and life in a “screen-obsessed world,” it is the reality that is perhaps most intriguing. As locals go on with their day, dodging tourists, their unique lifestyle and the way they’ve learnt to live with art - sometimes asking for some rooms to be shut down because of the noise - is worth pondering.

No culinary experience in the port city would be complete without seafood, and the fresher the better.

Halmae Sushi Restaurant in Gwangan-li, overlooking the ocean, serves up the freshest and finest seafood from sashimi, octopus, oysters, not to mention a medley of cooked seafood.

The best time to get there would be about 7 p.m. As the sun dips below the horizon and Gwangan Bridge lights up, every sense will be indulged.

There are also plenty of cafes and pubs lining the main road and overlooking the beach for a nightcap.

On a clear night, the skyline view from the top of Mount Hwangryong is stunning. On all sides of the mountain, you get to see every nook and cranny of Busan. The path up to the peak is also lined with flowers and trees that make the otherwise very steep and tiring route an enjoyable one.

Locals like to bike, walk and just meander through the park there and it’s easy to see why. A favorite with lovers, it’s cozy and reclusive, but worth the trek.

Check the weather forecast beforehand though; a little big of fog combined with gusts can mar the experience.

Breakfast is an important meal and this is especially true when in Busan, after a night out.

Blowfish soup is “the dish” for the morning after, and this poisonous fish, with its clean taste and flesh much like chicken meat, will no doubt cure any hangover, not to mention inject a dose of much-needed energy for weary travelers.

Keumsu Bokguk is a franchise that specializes in serving up blowfish. They have outlets throughout Korea, several in Seoul too, but it all began here in Busan. Catering to the most discerning taste buds since 1970, the representative dish to start off the day is the original soup which comes with the fish, as well as water parsley, mushroom and bean sprouts. The soup is rather clear, not all that fishy and the meat surprisingly tender. Side dishes like the seafood cakes also taste a little fresher than they do in Seoul.

Another picturesque trail on the Galmaetgil, Igidae Park, like the route from the day before is again one of the lesser-known paths of the Galmaetgil. Although trickier to find for tourists, the view of the sprawling ocean set along the greens is dubbed one of the “healing” spots.

There is equilibrium of blue and green to rest your eyes on and the cityscape is also within sight.

After a leisurely stroll, the perfect way to unwind before getting on the train is by spending the day at the day spa inside Shinsegae Centum City. A fusion of Japanese hot springs, Balinese resort and Korean spa house, it’s decked out in luxury with only the finest materials. There is also an observation deck where you can just relax, sit and watch the world go by, or as is more common, to take a nap before the train ride back.

City Tour buses are a good way to get around Busan.

Check out citytourbusan.com for various routes.

From Seoul: Catch a KTX train from Seoul Station.