Lee swims past obstacle to excel as an instructor

Lee swims past obstacle to excel as an instructor 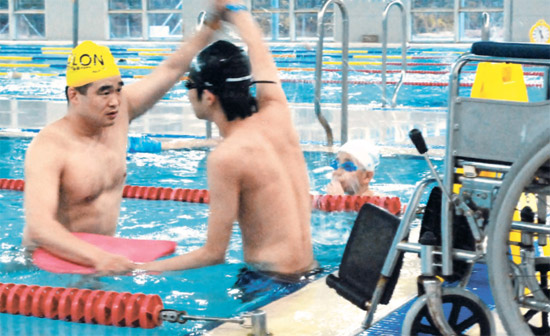 Lee Hwan-gyeong, 40, who has been teaching swimming at a sports center managed by Kolon Global in Paju, is somewhat of a local celebrity.

Among the employees at Kolon Global he is nicknamed “Dalin,” which means “top expert.”

People line up every month to sign up for his class, which is remarkable considering Lee is not like other swim instructors.

“His booming voice and friendly attitude toward children has made him the most popular swim teacher among parents,” said Kim Eun-gyeong, a 34-year old Paju resident.

After 6 p.m. on Tuesday, Lee was teaching three students with disabilities at the sport center’s swimming pool.

“Every Tuesday and Thursday I teach swimming to children with mental disabilities for free,” Lee said.

The popular swim teacher himself has a disability. He only has one leg.

Lee, speaking from a wheelchair, said the only problem with having one leg is that it is inconvenient when he needs to walk.

“But there’s no difficulty when teaching swimming,” Lee said.

The swim teacher lost his leg during mandatory military service in 1998. He was guarding his post when a car hit it. His left leg was amputated 15 centimeters (6 inches) above his thigh. Lee, who was wrestling for the Korea National Sport University at the time, said he felt as though he had lost everything.

But he was able to recover due to encouragement from his friends, family and then girlfriend, who is now his wife.

After the accident he switched from wrestling to one-legged skiing and was on the national Paralympics team for 12 years.

At the 2010 Paralympics in Vancouver, Canada, Lee ranked 17th in the world.

“Other countries had a lot more athletes [on the national team as one-legged skiers],” Lee said.

“We only had three on our team.”

Lee joined Kolon in September 2011 with the swimming life guard license he received from the Red Cross while in college.

“I convinced my interviewer that people like me should be given the opportunity,” Lee said.

Once he got the job it wasn’t long before he became popular thanks to his natural, friendly character.

He said he taught his students passionately as if each and every one of them were getting a private lesson.

Lee said many people wonder how a teacher with a disability could teach people without a disability.

“It takes adults two weeks to change their perception and 20 minutes for children,” Lee said.