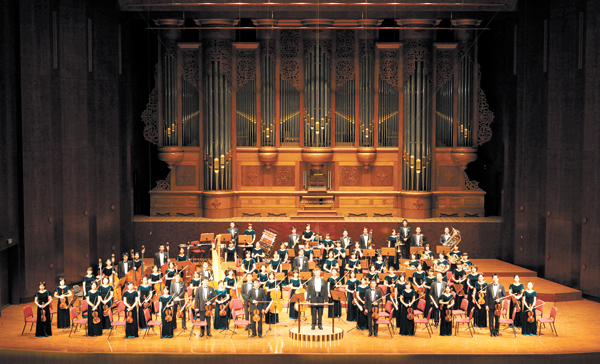 The Taiwan-based Evergreen Symphony Orchestra will stage three concerts in Korea, beginning in Seoul, then moving to Tongyeong and Busan, from June 9 to 12 under the baton of Gernot Schmalfuss. Provided by the organizer

The Taiwan-based Evergreen Symphony Orchestra is slated to stage three concerts in Korea, starting in Seoul, moving down to Tongyeong, then to Busan, marking its second trip to the country after its first in 2011.

Created by the Chang Yung-Fa Foundation in 2001, Taiwan’s only professional orchestra that is overseen by a private foundation will allow Korean audiences to experience folk songs from around the globe by performing its popular repertoire under the baton of Gernot Schmalfuss.

The orchestra began with 20 members, but expanded to a full-blown symphony with 71 members the next year. The orchestra grabbed public attention as the world-renowned Chinese violin virtuoso and conductor Lim Kek-tjiang took the position of music director and chief conductor. After leading the orchestra for about two years, Wang Ya-hui took over Lim’s position and became the first woman to hold such a position in Taiwan. Schmalfuss took over for her in January 2007. He previously served as conductor of the Munich Chamber Orchestra and as guest conductor of the Munich Philharmonic and Stuttgart Radio Symphony Orchestras.

The orchestra is said to be one of the few symphony orchestras in the world that have, on different occasions, worked with the three world-renowned tenors, Luciano Pavarotti, Jose Carreras and Placido Domingo. It’s also one of the most active orchestras in Taiwan to have world tours, performing in cities ranging from Tokyo, Shanghai and Beijing to Los Angeles, London and Ravello, Italy.

The Evergreen Symphony Orchestra’s repertoire at all three venues will include “The World Folk Music.” The orchestra will start off with a folk song of their own, “Longing for Your Early Return,” followed by a Chinese folk song “The Yao’s Dance.” As for a Korean folk song, it’ll play “Doraji,” in which the arrangement is done by Chuang Wen-chen.

The orchestra will also perform an Irish folk song, “Lord of the Dance.” There is also going to be a classical repertoire, including Suppe’s “Light Cavalry” and Tchaikovsky’s “Symphony No. 5 in E minor op. 64.”