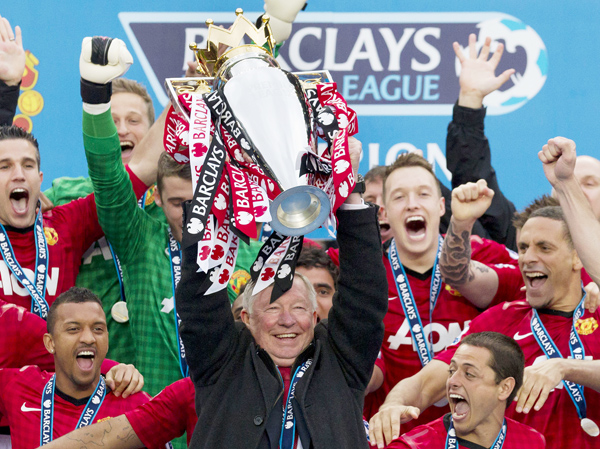 I rarely get the chance to visit home these days. But Manchester was very much on my mind this week. For virtually all of my life, Alex Ferguson has led Manchester United - and led them from a proud yet declining power to the summit of European football. Though not from Manchester, he has done as much for our city as anyone. By the end of the month, Fergie will be gone.

For the red half of Manchester, it feels a little like losing a wise old uncle. Or rather, an angry, red-nosed, wise old uncle with a stopwatch obsession. He navigated the commercialization and globalization of the game, keeping the Reds on top even when outspent by historically challenged, cash-rich upstarts like Chelsea and Manchester City.

For a fan like me, he was the last connection to the days when I first fell in love with United as a very small boy. My father would take me to Old Trafford once a month, before the Premier League even existed. I can still remember my first match - a tedious scoreless draw with Sheffield Wednesday. The most impressive thing was the way a man in the row in front allowed his young son to continually abuse defender Mike Duxbury with cries of “Duxbury, you wanker!” I would have found myself in big trouble for using language like that.

The game was like that in those days. Frankly, United weren’t very good; there were even those who wanted Fergie kicked out. And there was always that whiff of aggression. Leaving the stadium after away games, my Dad would say things like, “Hide your red scarf, son,” or “Don’t look at those lads over there.” This was the tail-end of the infamous hooligan era.

This is all a world away from today’s Premier League. The fans are noticeably of a different social class. And they come from places like London, and even Canada or Hong Kong. Clearly, poor Mike Duxbury was born at the wrong time. He now works as a school sports teacher; had he been 10 or 15 years younger, he’d be a millionaire today. I have no idea why it took so long for television and marketing people to realize that the world’s favorite sport would make for a great cash cow and great corporate entertainment. It took an Australian, Rupert Murdoch, to show them the way by using it as a means of selling satellite television subscriptions. United games used to just come free, via the BBC.

I’m glad I caught the end of the old era though, because I do hate the way the Premier League has gone. That’s why I’ll always have such strong memories of Alex Ferguson. Though Fergie enjoyed the benefits of commercialization as much as anyone else, he was the last of the old-school managers. You could see that in the way he would (rather unreasonably) yell at anyone who dared disagree with him.

There is a video of Fergie on YouTube showing him scoring a goal as a player for Scottish team Ayr United back in 1973. The opposing defenders cried offside, but the referee let the goal stand. Fergie began celebrating with his teammates. Suddenly, he realized something - he couldn’t let the other guys get the last word. He ran over to them, shouting and swearing and waving two fingers in their direction (in America, it’s one middle finger, but in the U.K., it’s the middle and the index finger in a “V” shape). His point made, he then rejoined his teammates to finish the celebration.

The game is just too polished now. Players and managers are so carefully media-managed that there seems to be no character to them. Post-match interviews are full of polite cliche, and the top stars cannot speak out of turn for fear of irritating their deep-pocketed sponsors.

They aren’t complaining, of course; there are not many ways in which a 20-something can become rich doing something he loves.

But for old-school fans now living in a world of shocking ticket prices and club owners who are either vultures or billionaire hobbyists (United has the former), the game has lost a lot of its romance.

The last time I went to Old Trafford, I took a Korean friend with me. I thought it would be a good experience for her. But I had to turn to the black market, paying the equivalent of 200,000 won ($180) for our tickets. And the stadium was pretty quiet - most people there didn’t seem to know any of the songs. Replica shirts in the shop cost about 100,000 won. I didn’t buy any.

But Fergie was there, jumping up out of his dug-out, screaming at Everton manager David Moyes, his newly anointed successor (a good choice, since Moyes is the nearest thing to a Fergie in British football today).

He screamed at the referee as well, of course, and even his own players. In spite of everything, our grouchy, beloved uncle was still with us.


* The author is Seoul correspondent for The Economist.