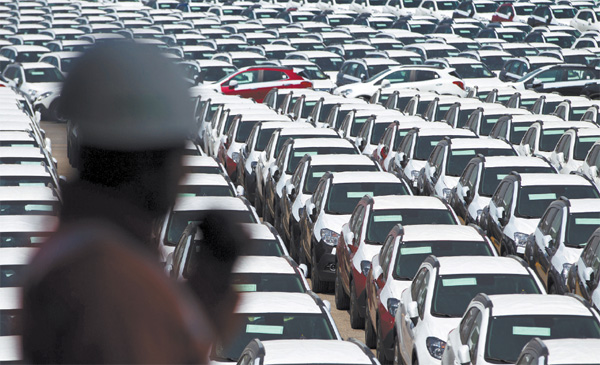 A worker using a handheld transceiver is silhouetted against parked General Motors Chevrolet automobiles bound for export at the Port of Incheon on April 19. GM Korea is engaged in a lawsuit with its labor union over how to define wages, which could cost the company as much as 1 trillion won (896 million dollars). [BLOOMBERG]

The ongoing controversy over how to calculate monthly wages is accelerating. President Park Geun-hye was forced to comment on the issue at a meeting with businesses in Washington on her visit to the United States early this month.

Last week, Minister of Trade, Industry and Energy Yoon Sang-jick weighed in, saying: “If it takes a long time to make a complete agreement on the issue, I should come up with a compromise plan that excludes regular bonuses from the monthly wage for a temporary period.”

The minister explained the next day in an interview with the local press that there are many different cases and his idea was just one possible solution, especially for the case of GM Korea, which is currently being heard before the Supreme Court.

The Korean Confederation of Labor Unions rejected Yoon’s comments and accused him of ignoring the rights of Korean workers.

The government has decided to weigh the issue starting next month.

The whole controversy began in March 2012 when a local bus company lost a legal battle with its trade union when the Supreme Court ruled that regular bonuses or long-service allowances should be calculated as part of the worker’s monthly wage.

Since March 2012, a number of unions have filed suits demanding the accounting change including manufacturing companies like automakers, shipbuilders and airlines.

The problem is that the definition of monthly wage in the ruling of the bus company was different from the definition by the Ministry of Employment and Labor. The ministry states that additional allowances that are not related to working hours, such as regular bonuses, are not calculated as part of the monthly wage. This definition was set in the early 1980s.

The issue became international after General Motors Chairman Daniel Akerson broached the subject with President Park in the U.S.

The American carmaker is in a court battle against employees of GM Korea over the issue, and the case is pending at the Supreme Court.

After GM Korea revamped its wage system between 2000 and 2002 and excluded bonus payments from the monthly wage, workers sued. They won the initial trial and the appeal.

In response to Akerson, President Park said, “This is an extremely difficult issue .?.?. This is not a problem of GM, but a problem of the Korean economy, so I will make sure to resolve it.”

Korea’s five business lobbying organizations issued a joint statement before the president left for Washington calling for the government not to confuse companies and employees by straying from current law.

The Korean Employers Federation said the government is sowing confusion with its statements.

“The government is going against its major goals of creating jobs and making people happy,” said Lee Hyung-jun, chief of the labor policy bureau at the KEF.

According to Lee, the history of the recent controversy dates back to 1994 when a court ruled that bonuses should be factored into the calculation of a monthly wage.

“If the number of companies that lose law suits with their unions increases, they would definitely cut back on new investments and employment, affecting the country’s economy,” Lee said.

The KEF estimated that a company with over 300 employees would have to pay an additional 38 trillion won if the court ruling is backdated for the previous three years.

One of possible measures being considered by the government to end the controversy is to pass a legislation to revise the current law on monthly wage. But passing the bill would be difficult as the ruling and opposition parties have opposite positions.

“Finding an appropriate point of compromise among employers, labor unions and the government would be the best answer,” said Sohn Min-joong, a researcher at Samsung Economic Research Institute. “The costs are potentially huge since the definition of the monthly wage affects so many factors like severance pay and insurance.”