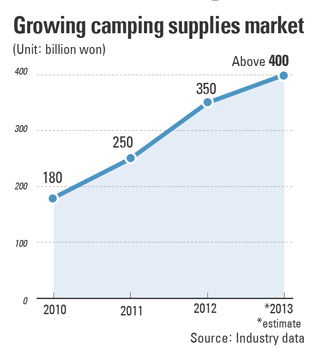 As the spring season really gets going and people spend more time outdoors, sales of camping supplies at large discount stores and online shopping malls have surged in the past few weeks.

Lotte Mart posted an 85 percent sales increase between May 1 and May 15 compared to the same period last year. Sales of mats recorded growth of 425 percent, while leisure tables surged 208 percent and sales of tents jumped 53 percent.

Sales of camping tents were up 62 percent compared to the first quarter last year, and sales of fishing supplies went up 36 percent.

“Despite economic difficulties, the number of consumers who spend for themselves is steadily increasing. The enforcement of a five-day school week and the popular TV show “Dad, Where Are You Going?” showing outdoor activities of celebrity fathers and their children seem to have contributed to sales growth,” a spokesperson for GMarket said.

According to the industry, the camping population surpassed one million in 2011 and is expected to reach 2.5 million this year. The number of camping sites has also reached 450.

Thanks to the camping craze, the camping supplies market is expected to expand to more than 400 billion won ($358.4 million) from 180 billion won in 2011, offering a lifeline to retailers in an otherwise sluggish market.

“It is enough to say that the consumer market is almost dead and camping and the leisure market is the only market alive,” said Park Young-joon, manager of the men’s sports team at Lotte Mart.

For the three-day holiday, which started yesterday with Buddha’s Birthday, the only competition between large discount stores was targeting campers.

E-Mart, the nation’s largest discount store chain, increased stocks of watermelon sliced in half, which families of two to four can easily have outside, by 50 percent and introduced quarter-sliced watermelon.

The expanding market for camping goods has also been a boon for outdoor clothing companies. The outdoor companies that only sold clothes have jumped into selling other outdoor products.

For instance, Kolon Sports started selling camping supplies such as burners and lanterns in 2009.

It estimated that sales of camping supplies were valued at more than 20 billion won, up from 14 billion won last year.

The company also increased the number of its camping stores to 40 from 26 last year. Each site displays a variety of camping equipment of all sizes.

The automobile industry is also looking to cash in and has played up its association with auto camping. Kia Motors, Hansung Motor, Hyundai Motor and GM Korea are rolling out auto camping events to attract customers.

Cannon Korea has also lectured how to take photos with its DSLR camera at a camping site in Yangpeyong Arboretum, Gyeonggi.

The beverage industry is attempting to release powdered soda for campers who wish to reduce the weight of their loads. Tea maker Teazen developed lemon and citron sparkling iced tea powder that creates sparkling bubbles when water is added. CJ CheilJedang introduced vitamin powder and Donga Otsuka introduced powder to make one liter of Pocari Sweat.