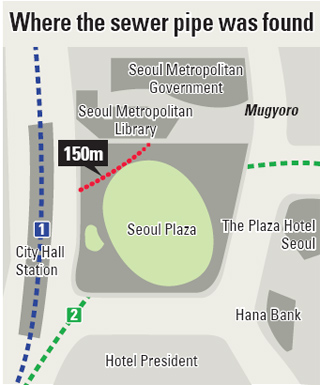 The Seoul Metropolitan Government recently excavated ancient relics and remains of a drainage system while conducting research on a tributary of Cheonggye Stream in central Seoul.

The origin date of the drainage system beneath Seoul Plaza in central Seoul is not certain, but many archeology experts say that it appears to have been established in the early 1900s.

“We found a 150-meter [164-yard] sewer pipe while the city government carried out research to restore a tributary of the Cheonggye Stream,” said a representative of the Seoul Metropolitan Government.

“The pipe seems to have carried off water to the Cheonggye Stream, being connected to other pipes.”

The other finds include stonework designed to stave off the collapse of mud-plastered walls in the Joseon Dynasty (1392-1910).

The stonework appears to be placed on the side of a stone bridge called Sogwangtong Bridge which is on a branch of the Cheonggye Stream,” said Kim Byung-ha, an official at the city office.

Back in the Joseon Dynasty, the bridge served as a place where people gathered, played traditional games and observed rituals.

“There are 75 bridges on the Cheonggye Stream,” said archeology professor Hong Sun-min of Myongji University. 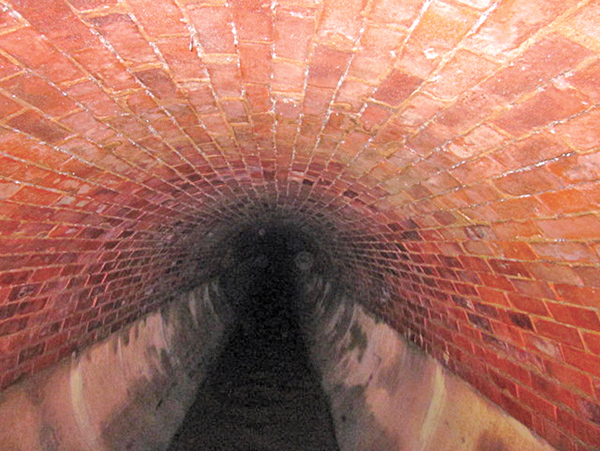 “The Sogwangtong Bridge was bustling with people, especially on the day of the first full moon,” the professor said.

The city government plans to take the findings to the Cultural Heritage Administration for further research.

This is not the first time ancient ruins have been uncovered near the stream. In 2004, when the restoration construction got underway, construction crews discovered a piece of stonework believed to decorate the royal tomb of Queen Shindeok from the Joseon Dynasty.

The stream is also the site where ancient artillery cannons and coins have been unearthed. Most of them are on display at the Seoul Museum of History.

Although numerous relics have been found near the main area of the Cheonggye Stream, this is the first time ancient items have been uncovered around the branch stream.

The vast majority of the tributaries are now covered.

The Seoul city office plans to restore the branch stream as well, preserving the surrounding ecology.

The local government pledged to hire archeologists and other experts to watch large construction sites for important geological or anthropological finds.

It looks to entrust the Seoul Institute with the task of carrying out a feasibility study for branch stream recovery.

When the former Seoul city mayor and president Lee Myung-bak directed the restoration project for the main section of the Cheonggye Stream, some experts blamed Lee for not paying enough attention to the surrounding ecological environment.

But buildings and highways have already been built on the covered, smaller streams, hampering the restoration effort.

“For places that are difficult to restore, Seoul city plans to set up a notice showing where the streams flowed in the past,” said Shin Jung-su of the city government.