Home is no longer where Koreans spend last days

Home is no longer where Koreans spend last days 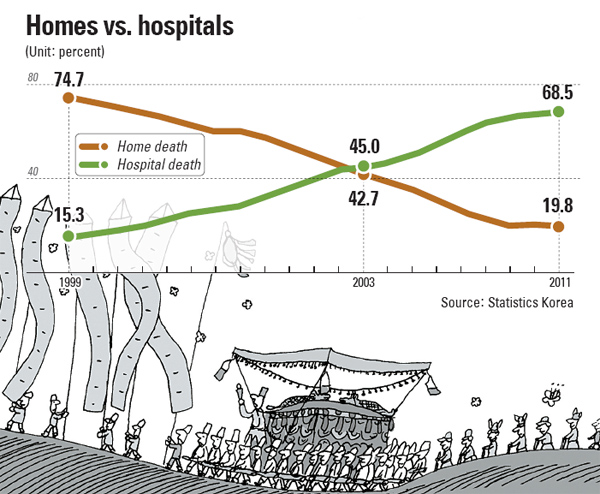 In his novel “The Notebooks of Malte Laurids Brigge,” German poet Rainer Maria Rilke portrays death as something personal and unique for each human being. The kind of death most disparaged is an impersonal death in a public hospital.

In Korea, more and more people are dying in hospitals rather than at home. Koreans used to consider an elderly relative’s death as an event that belonged in the home, but the tradition has faded.

“The place of death has gradually moved to hospitals,” says oncologist Huh Dae-suk of Seoul National University Hospital. “In the past, family members would observe a moment of silence surrounding their departed relative at home. But now that practice is replaced by the turning off of a medical equipment.”

A 57-year-old cancer patient surnamed Park typified the trend. Park, who was suffering from stomach cancer, spent the last seven weeks of his life in a hospital. Family members said he believed that there was a slim chance that the hospital could prolong his life.

Analysts say changes in the way Koreans live are also a factor in the trend. When most people lived in a detached house with a yard, it was easier to care for a dying relative and to carry out a funeral service at home.

But the number of apartments jumped from 391,000 in 1980 to 8,169,000 in 2010, and it’s more difficult to take care of relatives in a cramped apartment. Sometimes it’s the ill relative who chooses the hospital so as not to burden the family.

Koreans are also now used to going to funerals inside hospitals. “One or two out of 1,000 households will conduct a funeral service at home,” said Hong Seok-won, representative of funeral service company Boram Sangjo.

But not everyone approves of the new way of dying. Park Chang-bok suffered from terminal lung cancer for two and a half years. His doctor advised him to do what he wanted to do before his death. Park returned home from the hospital and made a series of rounds to see all of his family members.

“My husband spent more time with us before his death than at any time in his life,” says his wife Son Jeong-ja. “He said, ‘I’m happy. Thank you,’ right before he took his last breath. I thought it was a great decision for him to come home and live with us.”

Son Caritas, a nun who works at Mo Hyun Hospice in central Seoul, says deaths at home used to bring families together.

“Adult family members would ask younger ones to stand by the relative in critical condition,” she recalls. “That was also a kind of education about death.”

Despite the plain evidence that Koreans are largely dying in institutions, people still believe they’d rather die at home.

The respondents who favored dying at home said they wanted to spend more time with their families.