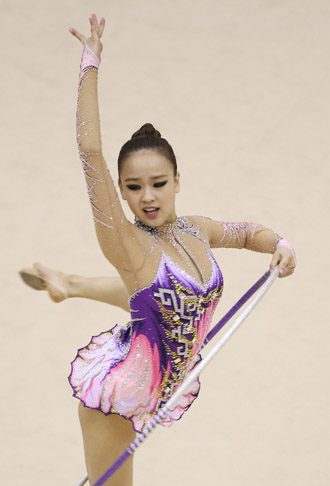 Son Yeon-jae won two silver medals at the World Cup in Belarus on Sunday, becoming the first Korean to win multiple medals at a World Cup.

She clinched a silver medal in hoop with 17.7167 points, second only to Daria Svatkovskaya of Russia, who received 18 points. Son received 17.9333 points in clubs, tying with Yana Kudryavtseva of Russia, for a silver medal. Melitina Staniouta of Belarus won a gold medal in clubs at 17.1833 points.

Son is on a steep learning curve. She has yet to win a gold medal at an international event, but took home her first silver medal at a World Cup in Pesaro, Italy, last month. She’s won medals at each of this year’s four World Cups, including two bronze medals.

She qualified for all of the four apparatus finals in Belarus, which she also did at the Sofia World Cup on May 4, and finished fourth in the other two individual events on Sunday, ball and ribbon. She received 17.65 points in ball, missing a bronze medal by 0.1167 point. In ribbon, she received 17.3667 points, behind the bronze medal-winner Svatkovskaya by 0.4 point.

Son, who recorded a fifth-place finish at the 2012 London Olympics, is seeking to become the first Korean to win a medal at the world championships to be held in Kiev, Ukraine, between Aug. 28 and Sept. 1.

She continued to break the Korean record by advancing to the 10-person all-around finals of the London Olympics last year. The previous Korean record at an Olympic rhythmic gymnastics event was a 12th-place finish in qualification, held by Shin Soo-ji at the 2008 Beijing Olympics.

She had the highest all-around World Cup record for a Korean with her fourth-place finishes in Belarus and Sofia.

Her next event is the Asian Championships to be held in Tashkent, Uzbekistan, from June 3 to June 9. Son secured the right to compete in the event by winning the national rhythmic gymnastics team qualifier on May 10. She will also represent Korea in the Summer Universiade in Kazan, Russia, in July.