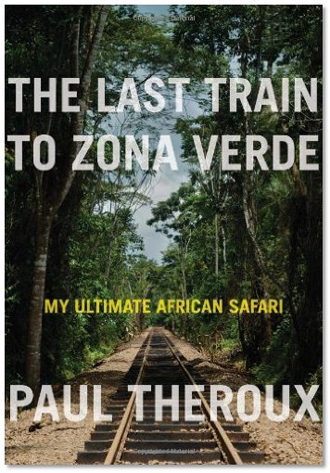 Paul Theroux said his literary goodbye to Africa at a train station in Luanda, Angola, five decades after he first visited the continent as a Peace Corps volunteer.

In his new book, “The Last Train to Zona Verde: My Ultimate African Safari,” Theroux describes a journey through South Africa, Botswana, Namibia and Angola that dead-ended at the depot when he felt no need to go further. The book, he says, represents a final chapter on his travels in Africa.

Theroux’s first book on Africa was a novel. He became one of his era’s most influential travel writers and chronicled his global journeys in books including “The Great Railway Bazaar,” “The Old Patagonian Express” and “Dark Star Safari.” His novels include “Saint Jack” and “Mosquito Coast.”

Theroux, who lives in Hawaii and Cape Cod, Massachusetts, spoke about the role of the travel writer, Africa’s uncertain prospects, and how it would be to die doing what he loved.

Q. I wondered as I read your book whether you were done traveling.

A. It’s quite a lot of trouble to take buses and trains and trucks and taxis and so forth overland in Africa. When I got to the point in Angola where I thought there really isn’t a lot of value in suffering if you’re not learning something, I thought well, this is the end of the line. I’ll always be traveling in Africa, but I think I’ve written all that I can possibly write of a useful kind.

What is it about rail travel that makes you say you’ve seldom heard a train go by and not wished to be on it?

The pleasure of it is indescribable. You can sleep, you can write, you can walk around. It’s very comforting, very reassuring, and for a writer, really wonderful.

You wrote about squalid cities, but you also said you are not a pessimist about Africa.

I don’t know what’s going to happen to Africa. The infrastructure is very poor. It’s a house of cards. The governments are fragile. In general, they’re corrupt. The cities are big and horrible, but the hinterland, the bush, is emptier than it’s ever been. It’s still full of possibility.

How has travel evolved over your career?

When I first started traveling it was full of problems to solve. [Now] it’s really not a lot of trouble to get on a plane. The other is the Americanization of the world. Everyone dresses the same. People wear a T-shirt and shorts. The whole world wears baseball hats. Fifty years ago when I was traveling you didn’t see baseball hats in India. You didn’t seem them in Africa.

The role of a travel writer is to discover the world, to verify what’s out there. It’s more necessary than ever, because the Internet makes people think they can just sit at home and know everything. But they don’t realize what the world is really like: how poor it is, how wonderful it is in other places, and how much there is to discover.

Do you have a preparation routine?

You need to be strong, optimistic and able to meet the demands of being alone. I read practical things. I buy a lot of detailed maps. I talk to people. I try to be as widely read as possible on the place, not necessarily before I go, but afterwards. I want to make discoveries by myself. I don’t make lists of people to look up. I would rather stay in the simplest hotel. I don’t like the social obligation that staying with people imposes on me.

What do you read on the road?

Books completely unrelated to the place that I’m in. Lately, I’ve been reading a lot of D.H. Lawrence. I make a little study of a writer - reading the books, stories, and then reading a biography, so that I know the author.

Travel can seem courageous, but it’s also an everyday occurrence for locals on the same roads.

They know where they are going. I’m going to a place that I’ll have to figure out. At my age, I take fewer and fewer risks. But it takes a certain confidence.

Three people you profiled in the book died soon after. What impact did that have?

[It was] a great shock. It made me examine my motives and think “Well, what if I died, am I doing what I love? Is what I am doing worth risking my life?” Reuters


The Last Train to Zona Verde: My Ultimate African Safari