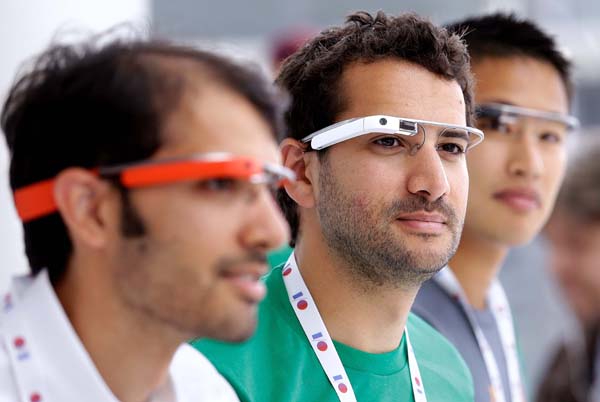 Google staged four discussions expounding on the finer points of its Glass wearable computer during a developer conference last week.

Missing from the agenda, however, was a session on etiquette when using the recording-capable gadget, which some attendees faithfully wore everywhere - including to the crowded bathrooms.

Google Glass, a cross between a mobile computer and eyeglasses that can both record video and surf the Internet, is now available to a select few but is already among the year’s most buzz-worthy new gadgets. The device has geeks all aflutter but is unnerving everyone from lawmakers to casino operators worried about the potential for hitherto unimagined privacy and policy violations.

“I had a friend and we’re sitting at dinner and about 30 minutes into it she said, ‘You know those things freak me out,’?” said Allen Firstenberg, a technology consultant at the Google developers conference. He has been wearing Glass for about a week but offered to take them off for the comfort of his dinner companion.

On another occasion, Firstenberg admitted to walking into a bathroom wearing his Glass without realizing it.

“Most of the day I totally forget it’s there,” he said. Many believe wearable computers represent the next big shift in technology, just as smartphones evolved from personal computers. Apple and Samsung are said to be working on other forms of wearable technology.

The test version of Glass looks like a clear pair of eyeglasses with a hefty slab along the right side. Since it began shipping to a couple thousand carefully selected early adopters who paid about $1,500 for the device, it has inspired a bit of ridicule - from a parody on “Saturday Night Live” to a popular blog poking fun at its users.

Other industry experts take a more serious tack, pointing out the potential for misuse because Glass can record video far less conspicuously than a handheld device.

A stamp-sized electronic screen mounted on the left side of a pair of eyeglass frames, Glass can record video, access email, provide turn-by-turn driving directions and retrieve info from the Web by connecting wirelessly to a user’s cell phone.

“Criticisms are inevitably from people who are afraid of change or who have not figured out that there will be an adaptation of society to it,” he said.

Schmidt acknowledged that there are certain places where Glass will not be appropriate but that he believed new rules of social etiquette will coalesce over time. Firstenberg said it will take time for all sides to get comfortable with the new technology.

“I don’t think we should go into the conversation assuming that Glass is bad,” he said.

Indeed, previous technology innovations such as mobile phones and wireless headsets that initially raised concerns are now subject to tacit rules of etiquette, such as not talking loudly on the bus and turning a ringer off in a meeting.

Still, some have decided to leave nothing to chance.

Casino operator Caesar’s Entertainment recently announced that Glass is not permitted while gambling or when in showrooms, though guests can wear it in other areas. In March, Seattle’s Five Point Cafe made headlines for becoming the first bar to ban Glass. “Respect our customers privacy as we’d expect them to respect yours,” says a statement on the cafe’s Web site.

The California Highway Patrol says there is no law that explicitly forbids a driver from wearing Glass while driving in the state. But according to Officer Elon Steers, if a driver appears to be distracted as a result of the device, an officer can take enforcement action.

Lawmakers are beginning to consider Glass.

On Thursday, eight members of the U.S. Congress sent a letter to Google Chief Executive Larry Page, asking for details about how Glass handles various privacy issues, including whether it is capable of facial recognition.

According to Google, there are no facial recognition technologies built into the device and it has no plans to do so “unless we have strong privacy protections in place.”

During one of this week’s conference sessions - an open discussion about Glass - members of the Glass team answered a question about privacy by noting that social implications and etiquette have been a big area of focus during the development of the product, which is still a test version.

Some of the Glass-phobia stems from Google’s track record on privacy. In 2010, Google revealed that its fleet of Street View cars, which criss-cross the globe taking panoramic photos for the Google Maps product, also had captured personal information such as e-mails and Web pages. Reuters