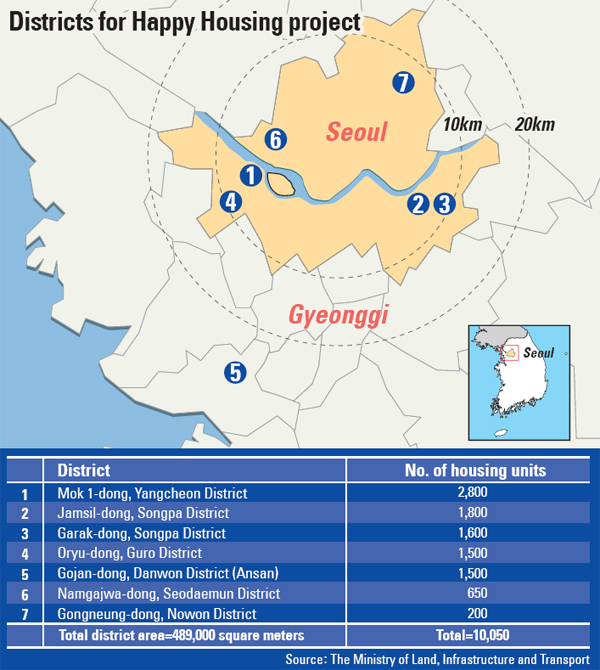 More than 10,000 residential units will be provided to people in need of shelter in the central city areas by developing state-owned land such as railway properties and reservoirs, the Ministry of Land, Infrastructure and Transport said yesterday.

“Happy Housing should serve as a stepping stone for hope for young people while for the elderly and the disabled it should be a comfortable and warm resting place,” said Land Minister Suh Seoung-hwan yesterday. “We allocated the districts so that they aren’t concentrated in one specific area.” 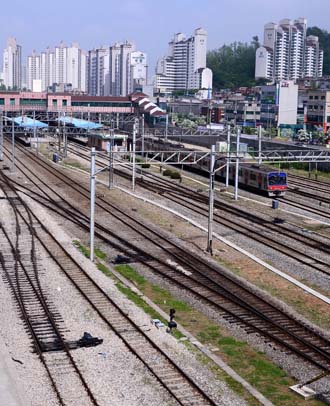 A railway property in Oryu-dong in Guro District in western Seoul where 1,500 housing units will be built as part of the Happy Housing project. [NEWSIS]

The combined size of the designated areas is 489,000 square meters (5.26 million square feet).

The Land Ministry said the areas have convenient access to public transportation and are equipped with education and commercial facilities.

Yesterday, Suh visited one of the Happy Housing development areas in Oryu-dong and held a brief press conference.

The Happy Housing project was an election pledge by President Park to tackle the country’s chronic housing problems. The project is similar to the previous government’s Bogeumjari Housing project but the Land Ministry said the new program provides housing in central city areas instead of rural areas.

It’s difficult for many families and particularly newlyweds to buy an apartment and many are living in jeonse (lump sum deposit) accommodations, but jeonse prices have skyrocketed. At the same time, household debt has become a big concern for the Korean economy as it nears the 1,000 trillion won mark ($895 billion).

The housing units that will be provided to nonhomeowners by the government in the Happy Housing area are imdae, or rental apartments built by public housing firms.

“To vitalize district economies, we will not only build rental houses but also develop the areas into commercial zones,” Suh said. That will also help boost job creation.

For example, the Happy Housing project area in Oryu-dong in Guro District will be developed under the concept of eco-friendliness by creating a park and building a health promotion center. The theme of the Gojan-dong area in Ansan, Gyeonggi, will be “communicating with multicultural families” considering that Ansan has the largest number of foreigners residing.

According to the Land Ministry, other developed countries have used old railway properties to develop their city, including the Nishidai housing complex in Japan, the Kowloon Bay Depot in Hong Kong and the Rive Gauche in France.

An official from the ministry said it will officially designate the seven districts as Happy Housing project development areas by the end of July and will receive legal permission to build around 10,000 housing units by the end of this year. Construction will be done by the Korea Land and Housing Corporation and SH Corporation. The Korean Railroad Corporation and regional offices will provide the central government with their railway and reservoir properties.

“Starting with the seven areas announced today, we will expand the project to other regional cities and provide happy housing to the people,” the official said.

“The project will eventually energize cities by giving them areas where people can find jobs and also receive welfare and cultural services,” he continued.