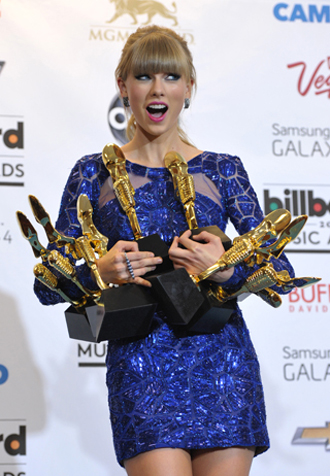 Another day, another domination for Taylor Swift: She was the red hot winner at the Billboard Music Awards.

Swift won eight of 11 awards, including top artist and top Billboard 200 album for “Red.” She told the crowd: “You are the longest and best relationship I ever had.”

She also had a colorful performance of her hit “22” - starting backstage and working her way to the main stage on the back of a bike with help from a dozen background dancers and a flurry of red balloons.

Justin Bieber also performed - twice - and was also a multiple winner with three awards, including top male artist, social artist and the fan-voted milestone award, beating out Swift and Bruno Mars. When accepting the latter - where boos were heard - he alluded to the tumultuous weeks he’s had in the public eye.

“I’m 19 years old; I think I’m doing a pretty good job. And basically from my heart I really just want to say it should really be about the music, it should be about the craft that I’m making. This is not a gimmick,” he said. “I’m an artist and I should be taken seriously and all this other bull should not be spoken.”

Bieber performed with will.i.am and solo when he sang “Take You” in leather pants, a leather vest and a black shirt that had one sleeve, as blue laser lights beamed. Miguel, too, had a show-stopping performance, though he seemed to kick a fan when he jumped over the crowd while singing his hit “Adorn.” AP