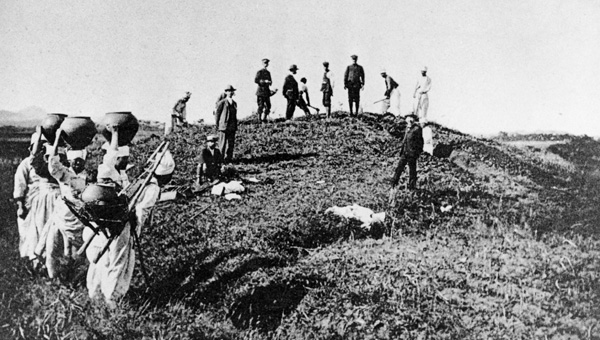 Lee Won, a descendent of the Daehan Empire’s ruling family, was speechless. Not long after, tears ran down his face.

On Feb. 5, Lee - also the president of the Imperial Household Culture Center - was allowed a rare glimpse into some of the artifacts of the fallen empire at the Tokyo National Museum.

The Daehan Empire (1897-1910) - sometimes translated as the Korean Empire - refers to the final years of the Joseon Dynasty (1392-1910), during which the state transformed into an empire in a desperate attempt to gather power amid rising Japanese encroachment. The short-lived empire, however, failed to prevent the Japanese colonization (1910-45).

So it’s understandable what an emotional experience it must have been for the 50-year-old Lee, standing in front of the helmet and armor of Emperor Gojong (1852-1919), his great-grandfather - artifacts that have never been shown to anyone but museum insiders. “It was so sad. I could feel the sorrows of a fallen empire,” Lee said after the viewing. “It was clear that they were in such a bad state, with some ornaments chipped off and clothes worn out.”

The helmet had dragon-shaped white jade on the front. The armor had two archosaurs - each with five claws and cintamani, wish-fulfilling jewels often carried by dragons in Eastern art, in their mouths - facing each other. “They belonged to the highest authority of the royal court. In other words, they must have been worn by either the king or the crown prince,” said the National Research Institute of Cultural Heritage, which reviewed part of the museum’s collection between 1999 and 2002 and published a book about it in 2004. 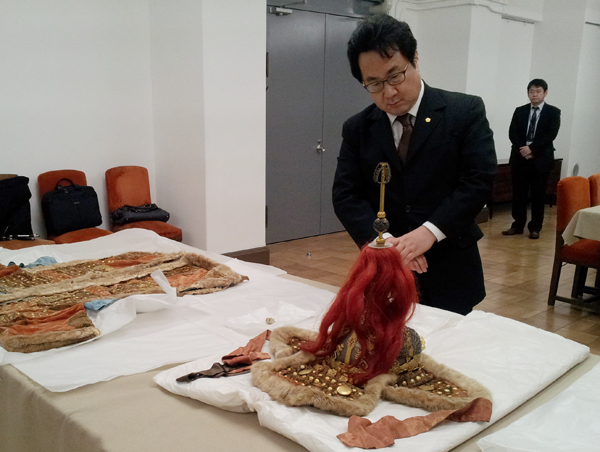 The Tokyo museum also officially acknowledged last year that the artifacts belonged to the imperial family of Korea’s Daehan Empire, but said it doesn’t know just how the artifacts ended up there.

The museum has been noticeably passive about the artifacts of the Korean imperial family - which also include other wardrobes. Lee was allowed a special visit only after repeated requests by him and Buddhist monk Hye Moon, who leads the Committee for the Return of Korean Cultural Property. The museum only caved in after the two were preparing a lawsuit concerning its information disclosure policy.

What Lee saw was part of what’s known as the Art Collection of Takenosuke Ogura (1870-1964), who was a wealthy businessman in Korea during the Japanese colonization. The collection - which refers to some 1,030 cultural properties mostly from Korea - was donated to the museum by his descendents in 1982. (The number of pieces in the original collection is thought to be 1,144, but only 1,030 were donated to the museum and the whereabouts of the rest is unclear).

The collection includes some of the most important treasures of Korea from ancient and modern times. In fact, 39 pieces of the collection have been designated Japan’s state treasures. They include the gold hat from Korea’s Gaya (the confederacy of territories in southern Korea between the first and sixth centuries) and a gilt bronze seated statue of Buddha from the Unified Silla Period (676-935).

Last month, the JoongAng Sunday obtained documents from Japan’s foreign affairs ministry which show that the Korean artifacts in the Ogura collection could have been returned.

JoongAng Sunday obtained the documents through a Japan-based civic group that calls for the revelation of the full text of the 1965 package compensation deal under which the two countries normalized their relations. The 1965 deal is something that the Japanese government always brings up when Korea raises the issues of compensation for colonial laborers and sexual slaves, as well as the return of looted cultural properties. Japan repeatedly claims that all issues regarding its colonial rule were settled through the deal, but the civic group has been calling on the Japanese government to disclose the full text of the deal, on suspicions that Japan has been revealing only part of the deal, which works to Japan’s benefit.

According to the documents from Japan’s foreign affairs ministry - drawn up on Feb. 14, 1962, by the Northeast Asia division of the ministry, the Japanese government once considered returning the Ogura collection to Korea. The documents classified the collection as “an item that can be considered for return at this point.” The document also said, “[the Japanese government] could purchase part of the Ogura collection which Korea is showing special interest in. Or donation based on Ogura’s voluntary intention is another option.”

“This shows that the Japanese government even considered buying off the Ogura collection, a private collection, [to return it to Korea],” said Choi Bong-tae, a lawyer whose case included a compensation litigation for Korea’s colonial laborers forcibly mobilized by Japan.

Korea attempted to get back the collection on numerous occasions since its liberation. Korea sent a resolution in 1945 to Douglas MacArthur (1880-1964), the U.S. general who was the de facto ruler of Japan in his role as the supreme commander for the Allied Powers after the end of World War II. Korea also raised the issue throughout the first to sixth rounds of Korea-Japan summit talks that took place between 1952 and 1965. Feeling threatened, an organization under Japan’s cultural ministry called “A committee for protection of cultural properties” strongly opposed returning the collection, Korean scholars say. “For them [those who opposed the return], the return was probably seen as admitting and atoning its colonial past,” said Ryu Mi-na, a researcher at Kookmin University Institute of Japanese Studies.

In Japan, Ogura - who was just one of many Japanese in power who collected Korean artifacts during the Japanese colonization - is largely assessed as the supporter of cultural properties. It is mainly because of the high quality of his collection, which includes a wide range of artifacts like Buddhist statues, paintings and ceramics spanning across many eras.

However, in Korea he is better recognized as a notorious looter of Korea’s treasures. In fact, in his handwritten manuscript that details the items in the collection, he says that, “I am only a layman in history and archaeology.”

“Ogura was a powerful businessman and he seized many of Korea’s important treasures by paying robbers across the peninsula hefty sums of money,” monk Hye Moon said. “Chances are very high that cultural properties that were discovered through archaeological excavation were either found by robbers or taken out of the country illegally.” There is also a tale that Ogura used dynamite to blow up an ancient tomb in Changnyeong, South Gyeongsang, to rob it.

It’s true that one can easily construe that artifacts like the emperor’s helmet and armor that represent a country’s sovereignty didn’t come into Japan’s possession through normal, legal means. In fact, some Korean scholars say that somewhere between 600 and 700 cultural properties discovered through archaeological excavation and included in the Ogura collection look to be the work of robbers or stolen goods.

During the Japanese colonization, the Japanese Government-General of Korea uncovered many of Korea’s cultural properties across the peninsula under the project it dubbed “Investigation Project of Joseon Historical Remains.” Critics say the problem is that although Japan dug up many parts of the country in massive excavation projects, it left few detailed excavation reports.

The principle of the excavation projects was that everything that’s discovered goes in the possession of the Japanese Government-General of Korea. But Ogura owns eight relics that were uncovered in ancient tombs in Gyeongju, North Gyeongsang. Furthermore, records say the relics of the tomb, known in Korea as Geumgwanchong, were traded at high prices shortly after the excavation. Brokers were also arrested.

In need of proof

But what Korea needs is more than just circumstantial evidence, suspicions and tales.

“One of the reasons that Korea couldn’t bring back the Ogura collection [during the 1960s when return was being discussed] was because it wasn’t able to give evidence that the collection got in the hands of the Japanese through illegal means,” said Guk Seong-ha, a curator at the National Museum of Korean Contemporary History.

Monk Hye Moon also says that the most important thing is that the government makes its stance clear about the issue and also starts an investigation into exactly how the Korean artifacts ended up as part of the collection and finally in Japan.

“It is because all people owe it to their future generations to preserve their cultural heritage in their land and pass it down.”