Arsenal edges out Spurs to claim final spot in CL

Arsenal edges out Spurs to claim final spot in CL 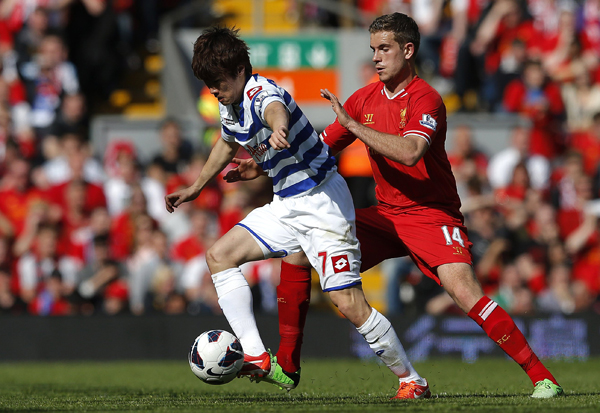 Arsenal broke the hearts of their archrivals Tottenham Hotspur yet again on Sunday as they claimed the final Champions League spot at their expense on a final day of the Premier League season bursting with goals and goodbyes.

Laurent Koscielny scored a 52nd-minute winner as Arsenal won, 1-0, at Newcastle United to secure fourth place with 73 points, one point ahead of the fifth-place Spurs, who mustered a late goal from Gareth Bale to beat Sunderland, 1-0, at White Hart Lane.

“These players are special, I told them many times, they showed it in the last two months; they have been absolutely exceptional,” Arsenal manager Arsene Wenger, whose side had trailed Spurs by seven points in March, told Sky Sports.

Chelsea sealed third place on 75 points with a 2-1 win at home to Everton, where both Rafael Benitez and David Moyes were taking charge of their sides for a final time.

Manchester United had already been crowned champions and their attention was on giving retiring manager Alex Ferguson a send-off to remember but as the goals rained in they could not give him a win as they drew, 5-5, at West Bromwich Albion.

Last year’s champions, Manchester City, finished 11 points behind United in second after a 3-2 defeat at home to Norwich City on a day where 36 goals were scored across the 10 fixtures.

Manchester City ended a disappointing season, where they lost the FA Cup final to relegated Wigan Athletic and gave up their Premier League title without much of a fight, on a losing note at home to Norwich.

They had twice come from behind with goals from Jack Rodwell to draw level before Jonathan Howson won the game for the visitors at 65 minutes.

There were six goals at West Ham as Kevin Nolan scored a hat-trick in the hosts’ 4-2 win over Reading, which had already been consigned to second-tier football for next season along with Wigan and Queens Park Rangers.

QPR bid goodbye to the top flight with a 1-0 defeat at Liverpool, where Anfield favorite Jamie Carragher was making his final appearance before retirement, while Wigan drew, 2-2, at home to Aston Villa.

With first and second place decided some time ago and all three relegation spots already determined, the burning issue of the day centered on who would grab the final top-four place.

Discounting the highly improbable mathematical possibilities, it boiled down to a battle between north London’s big foes, Arsenal and Tottenham.

Wenger’s side had the advantage before kickoff, with a one-point lead and the knowledge that as long as they won at Newcastle, the Champions League place was theirs.

They were facing a Newcastle side that was no longer troubled by relegation fears after securing their top-flight status and that lack of pressure translated into a troublesome first half for Arsenal as the hosts enjoyed the better chances.

Arsenal came out for the second half with a bit more spark and seven minutes into it finally got the goal they craved as Theo Walcott’s free kick was headed on by Per Mertesacker and Koscielny stayed onside to prod the ball home.

Walcott hit the post in stoppage time as Arsenal ended a nervy game on top. Reuters