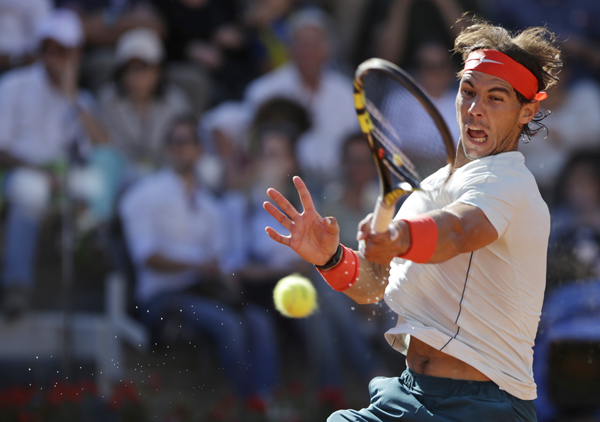 Rafael Nadal returns the ball to Roger Federer during their final match at the Italian Open tennis tournament in Rome, Sunday. [AP/NEWSIS]

ROME - After all these years, Rafael Nadal still knows how to dominate Roger Federer.

In the 30th meeting between the two tennis greats, Nadal controlled the final from start to finish to win, 6-1, 6-3, Sunday for his seventh Italian Open title.

It tied for the second-most lop-sided win in the series since Nadal also lost just four games, but over three sets, in the 2008 French Open final against Federer. At the tour finals in London in 2011, Nadal allowed Federer just three games.

“For that to happen between two players with not that much difference, it has to be because one player plays very well and the other is having more mistakes than usual,” Nadal said. “That’s all.”

Nadal improved to 20-10 in his career against Federer, and showed once again that he’ll be the player to beat when the French Open at Roland Garros starts next Sunday. It was the fifth-ranked Spaniard’s sixth title since returning earlier this year from a seven-month layoff due to a left knee injury.

“I’m playing much better than I dreamed of a few months ago,” Nadal said. “I’m doing the right things to play well.”

Federer complimented Nadal for the way he took his time before returning to the circuit.

“It goes to show that’s what every player should do,” Federer said. “Now he’s as strong as ever and is going to be the favorite for Roland Garros.”

In the women’s final, Serena Williams won her fourth consecutive title of the year in impressive fashion, defeating third-seeded Victoria Azarenka, 6-1, 6-3. The top-ranked American will go to Paris on a career-best 24-match winning run.

She didn’t drop a set while winning this title.

“I moved better than I did all week,” Williams said. “Hopefully I can stay like this. I feel really good.”

Federer hadn’t previously dropped a set all week as well, but he had no reply for Nadal’s topspin-heavy groundstrokes. The 17-time Grand Slam winner attempted serving and volleying, but he either missed the volley or Nadal passed him with the return.

“I was missing too many easy forehands,” Federer said. “And if you don’t stick your volleys or serve very accurate, it’s very difficult.”

It was 20th meeting between Nadal and Federer in a final, tying the Ivan Lendl-John McEnroe rivalry for most championship matchups in the Open era.

The women’s final Sunday was also a short affair.

On a pleasant spring day, Williams immediately took control by breaking Azarenka’s serve twice to take a 3-0 lead in the opening set.

After trading breaks midway through the second set, Williams took control again when Azarenka double-faulted to give her a 5-3 lead. Williams served out the match at love, screaming when she unleashed a backhand winner down the line to close it out.

“She definitely showed incredible tennis today,” Azarenka said. “But I don’t think the score says how close the match was. She was better at the key moments.” AP