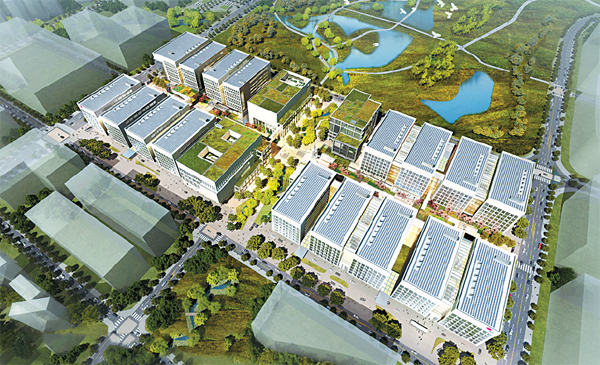 A computer graphic-generated photo of how LG’s R&D complex is going to look like. Provided by the company

As part of its contribution to the country’s drive to have a more “creative economy,” LG is investing an additional 800 billion won ($716.3 million) on a research and development complex to accommodate the so-called “LG Science Park” in Magok, southwestern Seoul.

The conglomerate that owns the country’s second-largest electronics producer said yesterday the extra expenditure will bring the entire investment in the group’s science mecca to 3.2 trillion won and increase the size of the project by 40,000 square meters (431,000 square feet) to 170,000 square meters.

Construction is set to begin next year and the park is to be completed in 2020. The number of LG affiliates that will send their research workforce to the complex will rise from the previous six to 11. Some 30,000 R&D workers will be stationed there.

“Given researchers from key LG affiliates will be gathering in a single location, other R&D efforts with other business partners are expected to become more comprehensive and integrated,” said LG in a statement.

Inside the science park, LG will run a facility where affiliates will conduct collaborative research with start-ups and other smaller firms and university students majoring in engineering will work as interns. That raises the possibility that employment opportunities will rise.

The increased investment in the R&D efforts came after LG Chairman Koo Bon-moo told President Park Geun-hye during their visit to the United States earlier this month: “I will take the lead in establishing R&D facilities that will be as good as those ones run by noted overseas firms so outstanding researchers from home and abroad could concentrate on their work.”

LG has been exceptionally active in working with the new administration’s goals. Earlier this year, the nation’s fourth-largest conglomerate came up with a plan to earmark 20 trillion won for investment - the first among top 10 business groups in Korea. The amount of investment is the largest in LG’s history too.

The group also plans this year to give 400 billion won worth of orders to smaller companies in three fields: system integration (SI), advertising and construction.

LG will either directly place the orders or put deals up for public bidding. That will shrink the volume of orders that were circulating only among LG affiliates and help small- and medium-sized firms in partnerships with LG.

For instance, LG CNS, an SI affiliate, will have smaller companies take over 230 billion won worth of orders that would otherwise have gone to other LG affiliates during this year.