Nissan and Mitsubishi join forces on a minicar

Nissan and Mitsubishi join forces on a minicar 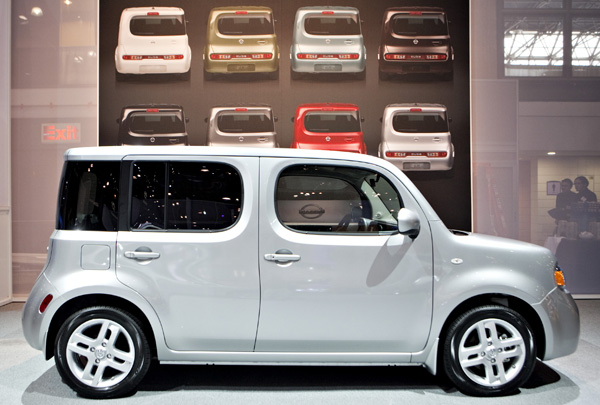 A Nissan Cube minicar on display during a media preview of the New York International Auto Show in New York on March 31, 2010. [BLOOMBERG]

Nissan Motor will start selling the first minicar it jointly developed with Mitsubishi Motors in Japan next month amid increasing demand from the nation’s consumers for smaller and cheaper vehicles.

The automaker, based in Yokohama, began production of the minicar at Mitsubishi’s Mizushima plant in Okayama prefecture yesterday. The model will be sold as the Nissan DAYZ and Mitsubishi Wagon in June, according to the companies.

Nissan, which previously sold rebadged minicars made by Suzuki Motor and Mitsubishi, is targeting to gain market share in a category that now accounts for 38 percent of new car sales in Japan. Known as “Kei” cars and favored for their low cost and ease of handling, sales of this segment are projected to rise this year even as total industry demand shrinks with the end of government incentives, according to IHS Automotive.

“It’s important to introduce mini vehicles if you want to expand in the domestic market,” said Kohei Takahashi, an analyst with JPMorgan Chase in Tokyo. “In the Japanese market, which is shrinking, this is one of the very few growing segments.”

Nissan started a joint venture with Mitsubishi two years ago to develop minicars for the Japanese market and plans to introduce a second model early next year. The Nissan DAYZ will compete with Honda Motor’s N-box, the bestselling minicar model this year, and Daihatsu Motor’s Move.

In Japan, minicars are distinguished by their yellow number plates and were originally created as a cheap means of transportation as the country industrialized after World War II. Last month, minicars accounted for seven of the 10 bestselling models, according to data from the Japan Automobile Dealers Association and Japan Mini Vehicles Association.

With engines smaller than 0.66 liters, minicars became popular in recent years after the government lowered the purchase tax and insurance premiums, and in most rural areas, exempted them from a requirement to prove there is adequate parking space available.

Still, margins are slim and automakers need to sell about 10 minicars to make the same profit for a normal passenger vehicle, according to estimates by Koji Endo, an auto analyst at Advanced Research Japan in Tokyo.

Honda introduced its N-Box minicar line in 2011 and plans to unveil five minicar models by 2015. The Tokyo-based carmaker, which almost doubled its market share in the category to 18.4 percent in 2012 from a year earlier, expects about one in every two vehicles it sells in Japan this year to be a minicar, Senior Managing Officer Sho Minekawa said on May 13.

That could propel it past Toyota Motor subsidiary Daihatsu, which saw its market share fall to 33 percent in 2012 from 36 percent a year earlier. Suzuki accounted for less than 30 percent of minicar sales in the year ended March for the first time since at least 2007. Bloomberg