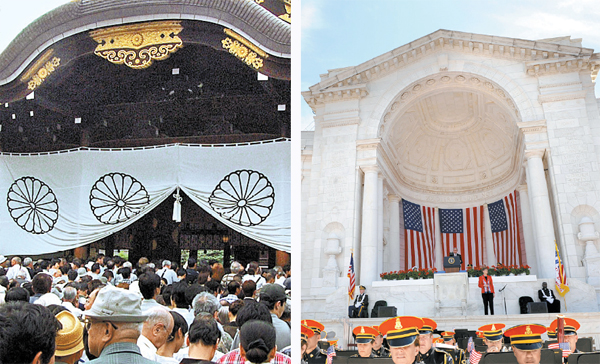 As Asian countries are still reeling from the sting of Japanese lawmakers’ visit to the contentious Yasukuni Shrine, which enshrines Class A war criminals, Japanese Prime Minister Shinzo Abe has caused further controversy by defending their action in his latest interview with a U.S. policy magazine, comparing paying respects at the shrine to visiting a national cemetery in Washington.

“About the Yasukuni Shrine, let me humbly urge you to think about your own place to pay homage to the war dead, Arlington National Cemetery in the United States,” Abe told Foreign Affairs last week in an interview for the July-August edition of the 100-year-old bimonthly magazine. “The presidents of the United States go there, and as Japan’s prime minister, I have visited.”

Last month, more than 170 Japanese lawmakers and ministers, including Deputy Prime Minister Taro Aso, made a pilgrimage to the controversial Yasukuni Shrine in Tokyo which honors the war dead, including some of the country’s highest-ranking war criminals convicted by the allied forces tribunal after World War II.

This spurred a backlash from Japan’s war victims, including Seoul and Beijing, and Abe’s latest defense of the visit adds salt to fresh wounds amid ongoing historical and territorial disputes.

Abe cited a Japanese history professor, Kevin Doak of Georgetown University, who said that visiting the Arlington National Cemetery, where Confederate soldiers are buried “does not mean endorsing slavery.”

Doak’s quote was taken from his 2008 essay, “A Religious Perspective on the Yasukuni Shrine Controversy,” which presented a spiritual perspective, namely as a Catholic, of paying respects at Yasukuni.

Abe has not yet personally visited the shrine since he took office in December, though he sent a ritualistic gift last month to mark the commencement of spring festivities at Yasukuni.

His grandfather, former Prime Minister Nobusuke Kishi, was arrested as a suspected Class A war criminal after World War II but never charged.

But Abe did not rule out the possibility that he may visit the shrine in the future.

“After Yasukuni enshrined the souls of the Class A criminals, China and South Korea did not make any claims about visits there for some years,” stated Abe in the interview. “Then suddenly, they started opposing the visits. So I will not say whether I will visit or refrain from visiting the shrine.”

Ahead of Japan’s upper house elections in July, Abe rides high on approval rating polls with signs of economic improvement in Japan. But his recent stream of nationalist remarks seeming to deny Tokyo’s wartime atrocities has raised the ire of neighboring countries, and his latest interview is drawing further backlash from Korea.

“The Yasukuni Shrine enshrines war criminals and is a facility that glorifies its war aggressions,” said Cho Tai-young, spokesman of Korea’s Foreign Ministry yesterday regarding Abe’s latest remarks comparing the shrine to the Arlington National Cemetery.

“Our government distinctly opposes paying respects at the Yasukuni Shrine,” added Cho and urged Japanese leaders “to lend their ears to [the Korean] government’s consistent position.”

Abe also made remarks that would likely infuriate Beijing, stating that, “The Senkaku Islands [called Diaoyu by China] are an integral part of Japanese territory, based on both history and international law.”