Nam, force behind the Miracle on Han, dies at 89

Nam, force behind the Miracle on Han, dies at 89 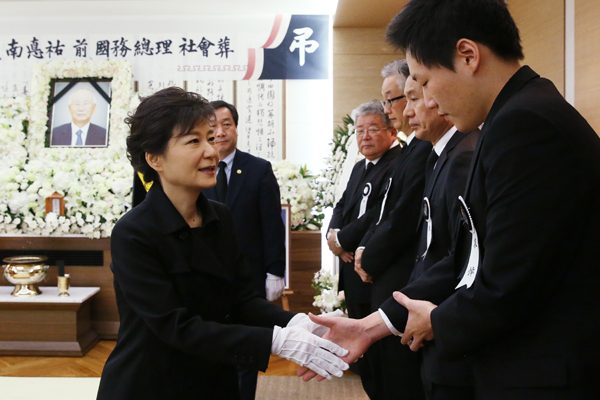 President Park Geun-hye expressed her sympathy yesterday over the death of Nam Duck-woo, the driving force behind the country’s dramatic postwar economic growth during her father’s era. Nam died Saturday night after years of battling prostate cancer. He was 89.

Park visited the Samsung Medical Center around noon yesterday and paid her respects before the mourning altar of the former prime minister, credited for his role in the “Miracle on the Han River.”

During the rule of her father Park Chung Hee in the 1960s and ’70s, Korea achieved rapid export-driven economic growth. Nam was the architect of the country’s industrialization and urbanization.

Nam is also known as the founder of the “Sogang School,” a group of elite public servants who studied at Sogang University and led the country’s economic development in the 1970s. “I pay my sincere respects before the deceased prime minister who devoted his life to the economic development of the homeland,” Park wrote in the guest book. After placing flowers, she also bestowed a Mugunghwa Medal, the highest honor in the Order of Civil Merit.

Former and incumbent senior members of the government, lawmakers, politicians and leaders of academia also visited the hospital to mourn Nam’s death. Nam is survived by his wife and two sons.

After a five-day mourning period, the funeral will take place tomorrow and his body will be buried at the National Cemetery in Dongjak-dong, southern Seoul. Han Duck-soo, chairman of the Korea International Trade Association, and former Prime Minister Lee Hong-koo will organize the funeral ceremony.

Born in 1924 in Gyeonggi’s Gwangju, Nam graduated from Kookmin University in 1945 with a degree in political science. He obtained his master’s degree in economics at Seoul National University and his doctorate at Oklahoma State University in the United States.

While serving as an economics professor at Sogang University in 1969, he was recruited by then-President Park Chung Hee as finance minister. From 1974 to 1978, he served at two top economic posts of the government at the same time, working as deputy prime minister in economic affairs and minister of the Economic Planning Board.

It was widely known that Park Chung Hee, after reading Nam’s publication on “price theory,” approached Nam. “You are very critical toward the government’s economic policy, so you should be in charge by taking matters into your own hands,” Park was quoted as telling Nam at the time.

Nam then served as prime minister from 1980 to 1982 under the Chun Doo Hwan regime. From 1983 to 1991, he worked as head of the Korea International Trade Association.

Nam also maintained ties with the Park family for two generations. When Park Geun-hye, the eldest daughter of the late President Park, left the Blue House at the age of 27 with her two siblings on Nov. 21, 1979, Nam was the special presidential economic adviser.

A photo that captured Nam’s sorrowful eyes while watching the three children depart remained in many people’s memory for a long time.

In 2003, he stepped up to become chairman of a group of patrons supporting Park Geun-hye and vowed to become her mentor.

“She is one of the rare women politicians who can lead this country,” Nam said of Park.

When Park made her first attempt to run in the election in 2007, Nam served as her chief economic adviser during her campaign of the presidential primary at the Grand National Party, predecessor of the Saenuri Party. She lost the primary but succeeded in her second attempt and won the presidential election last year.

“Although Nam supported her, he never intervened in politics,” said Choi Woo-sock, former vice president of the Samsung Economic Research Institute and former editor-in-chief of the JoongAng Ilbo. “He always gave advice from a distance.”

The last meeting between Nam and Park took place on March 13 this year when Park invited elder statesmen of the country to the Blue House for a luncheon.

After suffering from prostate cancer for years, Nam was admitted to the Gangnam Severance Hospital on May 6 after his condition worsened.

“I worked as a junior official when Nam was the minister,” said Deputy Prime Minister Hyun Oh-seok. “He was a man with wise insight.”