Protests over high-voltage pylons get intense

Protests over high-voltage pylons get intense 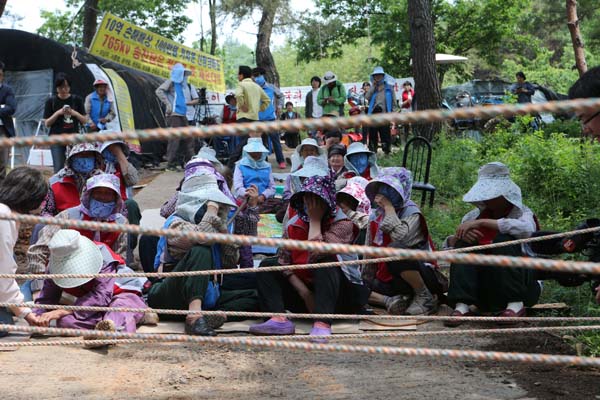 The residents are worried about the effect on their health of the high-voltage lines.

The corporation yesterday sent 195 construction workers, trucks and cranes to six designated sites near the southeastern city of Miryang.

The company said none of the 195 workers were subcontractors and all worked for the power corporation.

Local police dispatched around 500 police officers to prevent a physical clash between residents and the power company crews.

But construction work was hampered again by local residents blocking trucks and cranes from entering and passing the mountainous roads leading to the projected sites of the towers that will support 765-kilovolt power lines.

In four neighborhoods near the city of Miryang, 52 pylons are scheduled to be built. Yesterday’s crew was meant to build six transmission towers in rural areas including Sangdong, Danjang and Bubuk also in South Gyeongsang.

As of 3 p.m. yesterday, the company was able to proceed with construction at two sites.

To prevent work at the other four sites, protestors hung nooses from high tree branches in a suicide threat. Others stopped police and construction workers in their tracks by hurling bottles filled with human feces.

In January 2012, a 74-year-old Miryang resident immolated himself to protest the construction.

The government has emphasized residents will receive government support in exchange for allowing the construction of the pylons.

“There can be no dispute over the special package of support by the power corporation for Miryang residents,” said Park Sung-taek, an official at the electric power division at the Ministry of Trade, Industry and Energy. “We will continue to discuss compensation matters with the residents to resolve the issue.”

On the matter of civic environmental groups getting involved in the dispute, the official said the residents themselves don’t want them coming in.

The electricity provider has been setting up 161 transmission towers spanning 90.5 kilometers (56.2 miles) from Singori reactor in Ulju County, Ulsan, to an electric substation in Changnyeong County, South Gyeongsang.

Of the 161 towers, construction on the 52 towers near Miryang ground to a halt in September because of the protests. The remaining 109 elsewhere in South Gyeongsang have been set up, according to the Energy Ministry.