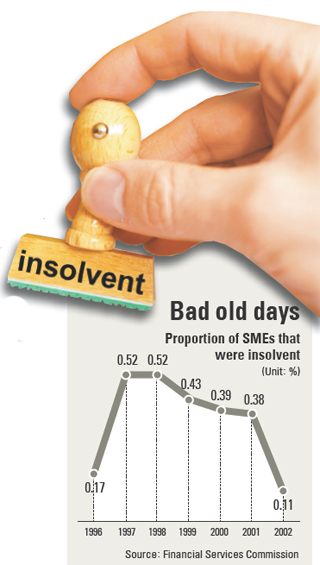 As part of the Park Geun-hye government’s helping hand for small- and medium-sized businesses struggling with debt, the Financial Services Commission (FSC) said yesterday it will write off some obligations of more than 110,000 delinquent borrowers who experienced hardship during the Asian financial crisis of the late 1990s.

Separately, the regulator will also wipe out credit histories of some 1,100 borrowers whose credit rating fell after assuming responsibility for debts of small and medium enterprises (SMEs) that went bankrupt also during the currency crisis.

“There are still people that are not able to participate in normal economic activities because of the debt they are obliged to pay back as a result of their companies going bankrupt from 1997 to 2001,” said Lee Hae-seon, an official at the Financial Services Commission, yesterday. “We came up with this program to help out debtors struggling not because of their personal liabilities but because of the other debts owed.”

According to the FSC, it will erase unfavorable debt records of 1,104 people from personal data sheets managed by the Korea Federation of Banks. These debtors have had trouble starting businesses or receiving loans because of their low credit ratings. Most of them signed joint surety contracts for small firms that became insolvent in the crisis.

During the Asian financial crisis that broke out in 1997, many companies suffered from credit crunches, which affected the financial sector when the volume of nonperforming loans increased. According to FSC data, in 1996, the insolvency ratio of SMEs was 0.17 percent, but in the following year, the figure jumped to 0.52 percent.

President Park has specifically expressed concern about debtors in arrears because of the Asian financial crisis.

“There are so many people that cannot be involved in new economic activities because of business failures they experienced during the IMF crisis [the local term for the Asian financial crisis] as they are not able to participate in any financial activities,” Park said at a meeting with her senior secretaries in March.

Along with the 1,104 debtors, another 113,830 delinquent borrowers who had their business fail will have up to 70 percent of their debt written off by the government. Their total debt has to be under 1 billion won ($898,069). The remaining debt will be paid off by debtors over a 10-year period.

The total amount of debt these borrowers owe is 13.2 trillion won, and the Korea Asset Management Corporation will pay the amount being written off and reschedule the balance.

The program will run from July 1 until the end of this year.

The Park administration has been aggressively introducing policies to help the economically underprivileged and also to reduce the country’s snowballing debt. One measure is the National Happiness Fund, a debt adjustment program for low-income families struggling with debt to regain good credit ratings. The fund, which was one of Park’s campaign pledges, was launched in March and is aimed at writing off as much as 70 percent of loans held by borrowers who have borrowed 100 million won or less from financial institutions and have been in arrears for at least six months as of the end of February.

Also in April, as part of efforts to prevent secondary debt pressure, the FSC said that it will abolish the country’s joint liability system in the nonbanking sector such as savings banks and insurance companies starting in July. The system had already been scrapped in the banking sector, prohibiting lenders from getting co-guarantors to assume secondary debt.